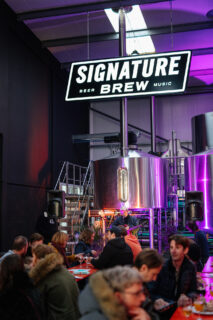 Blackhorse Road has a long and rich history of industry, with factories, mills and workshops taking over much of the area. The last few years have seen an influx of start-ups, cafés, ateliers and, now breweries moving in to the energetic, and fast-changing, corner of East London. A short walk from the Victoria Line and a stroll from the Walthamstow Wetlands, a new nature reserve created around a series of Victorian reservoirs, Blackhorse Beer Mile makes for an ideal spot to stretch your legs, take in some industrial history and quench your thirst with a diverse range of beers from some of the most renowned breweries in the country.

The Beer Mille begins just five minutes’ walk from Blackhorse Road tube and overground station, offering a great way to spend a weekend enjoying award-winning beers in the places they were brewed.

THE BREWER’S BAR AT SIGNATURE BREW

Launched in 2011, and crowned SIBA’s highly prestigious Brewery Business of the Year 2018, Signature Brew is the world’s number one brewery for band collaboration beers, having brewed with Idles, Mogwai, Alt-J, Slaves, Mastodon, Frank Turner, Rodney P, Enter Shikari, Sports Team, Dynamite MC and many more.  Led by founders Sam McGregor and Tom Bott, Signature Brew has channelled the spirit and energy of live music into a brewery that stands for craftsmanship, artistry and passion.

Located inside the brewery, The Brewer’s Bar serves up 12 lines of the freshest Signature Brew beers, allowing drinkers the chance enjoy their pint among the sights, sounds and hoppy smells of the brewery, with large indoor and outdoor seating areas, plus regular street food and live music.

New for Autumn 2020 is Pilot Radio, an ongoing small-batch, super limited-edition series of beers brewed by Signature Brew’s award-winning brew team. These rare and experimental beers are created on the in-house pilot kit – a miniature brewery-within-a-brewery – and are exclusively available at Signature Brew’s venues where guests can offer their feedback on each beer. There are only 200 pints of each Pilot Radio beer, versus 5600+ pints of the usual seasonals. Depending on the response, some will be scaled up into full brews, while some will remain rare pilot brews forever. Tune in. Feedback. Enjoy.

Tom Bott says, “We knew when we chose Walthamstow as a base for our brewery that we were coming in to a highly energetic area filled with an impressive selection of creators and makers of all kinds, but to have a newly created collective of supportive and inspiring brewers as our neighbours is more than we could have asked for. We hope E17-ers, Londoners and beer aficionados from around the country will enjoy discovering such an eclectic range of beers, whilst being able to chat to the people that make them.”

Wild Card Brewery was founded in 2012 at the Ravenswood Industrial Estate in Walthamstow, they brewed Mon-Fri and come the weekend, they would open the brewery doors and serve up their beers.

After outgrowing their site, they crowdfunded in 2017, moving the brewery over to Lockwood Way in 2018, doubling capacity – which means lots of Wild Card beer for all!

Exale Brewery & Taproom is home to one of London’s most exciting new breweries as well as Victory London Distillery. Their unique style is based around forging balanced, complex beers inspired by the incredible ingredients around them every day, from foraging in Epping Forest to collaborating with local coffee roasters and chefs.

The taproom is a bright space converted from an old furniture factory, nestled next to the brewery. Packed with plants and cloud lights, it’s even home to a fish tank feeding the aquaponics system. The heated and sheltered outside seating & terrace can fit up over 100.

There are over 10 taps on at a time as well as loads of cocktails courtesy of Victory London. There’s also a smorgasbord of incredible pop up food vendors, DJs every Saturday night, plus beer launches and special tasting events throughout the year.

Co-Founder Mark Hislop says, “We chose Blackhorse lane to be our home because, being from the area, we knew how much we loved E17 and felt connected to it already, we are so lucky to be surrounded by this amazing community of brewers, makers and creators who all share our core principles and values. Also being based on the edge of the wetlands and Epping forest allows us to directly source many of our ingredients through foraging so it helps us keep our carbon footprint low and work towards being a sustainable business, something that is hugely important to us.”

Incorporating the UK’s largest beer hall, a flexible event space, and a huge beer garden – which soaks up the sun all day in the summer and has plenty of cover and heating in the winter – Truman’s Social Club was born as a space with community at its heart to celebrate and savour the best local beer, food and makers in East London.

Open seven days a week with a capacity of over 650 people (with social distancing), it has been specially designed to be both safe and relaxing; with features over and above minimum requirements such as foot-operated sinks and a special ventilation system to increase air circulation.

There is a choice of 20 beers on tap from Truman’s and other guest brewers, as well as a rotating line-up of renowned East London food traders, such as Zero Sushi and Last Night A Vegan Saved My Life. A weekly community-led programme of events run throughout the year and its versatile spaces are available to hire for locals to bring their next big ideas to life. Think everything from exhibitions, markets, pop-up shops, product launches, to gigs and film nights.

It’s an open house for open minds. Drop in to discover, relax and create.

As of October 2020 all of the venues are open and pouring fresh pints, with social distancing measures in place. For more information, including a suggested route around the Beer Mile, please visit www.signaturebrew.co.uk

To request a tour of the route, images or quotes, please contact Right Hand PR: