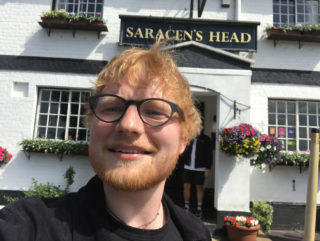 Ed Sheeran outside the Saracen's Head

Rock star Ed Sheeran has added another prestigious award to his collection of gold discs, Grammys and BRITs, after completing the Brakspear Henley Ale Trail.

The acclaimed songwriter and a group of friends stopped off for a pint at the Saracen’s Head pub on Greys Road as part of the trail, which involves a visit to 10 Brakspear pubs in the town.

Co-licensee Mel Roberson, who run the Saracen’s Head with husband Colin, said: “Collin came to me and said “I think Ed Sheeran’s in the bar”. We Googled a picture of him to make sure it was, and he was so friendly. He stayed for a game of pool and said what a great idea he thinks the Ale Trail is – apparently he only has one local pub where he lives.”

By getting their card stamped in each pub, Ale Trailers qualify for rewards including exclusive Ale Trail t-shirts.

Marketing manager for Brakspear, Emma Sweet, said: “We’re delighted that Ed has completed the Ale Trail and had a chance to enjoy our pubs, which are so much a part of the social life of the town.

“We hope to see him sporting his Henley Ale Trail t-shirt on stage, and also hope that he’ll join us at our annual Ale Trail party in January. We always book a live music act for the party, so if Ed would like the gig, we’d be very happy to consider him!”

Details of the Brakspear Henley Ale Trail are at www.henleyaletrail.co.uk/. Participants have a full year from starting the trail to visit all 10 pubs and claim their rewards.

Caption to attached image: Ed Sheeran outside the Saracen’s Head