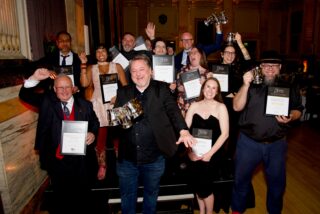 Winners of the Guild of Beer Writers Awards 2021, with Beer Writer of the Year Pete Brown (centre)

The Guild’s annual awards are now open for entries, with a deadline of 2nd September.

The prize fund also stands at a record high of £18, 500, to be shared between winners and runners up.

All category winners, runners-up and the overall Beer Writer of the Year as well as Brewer of the Year sponsored by SIBA, will be announced at the Guild’s popular Awards Dinner, taking place on 23 November at One Great George Street in London.

All entries will be judged on how well they further the Guild’s mission “to extend public knowledge and appreciation of beer and pubs”.  Judging is carried out by a panel of writers, communicators and industry experts chaired by Pete Brown, current Beer Writer of the Year.

For more information and to enter, visit: Awards | The British Guild of Beer Writers (beerguild.co.uk)

Thanks to our sponsors who make the Awards and dinner possible.