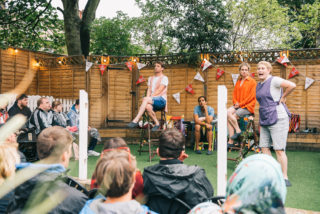 Romeo & Juliet performance for Special Olympics GB at The Half Moon, Herne Hill

As part of its annual Shakespeare in the Garden production, Fuller, Smith & Turner – the premium pub and hotel business – has hosted exclusive Shakespeare performances for two charities and a local primary school this year. The first was a production of Romeo & Juliet at The Plough in Ealing for local school children from Grange School, the second event was a performance of The Merry Wives of Windsor held for the youth charity OnSide with young people from its Youth Zone, Future, in Barking and Dagenham in attendance at The Pilot in Greenwich and the final of the charity shows was another rendition of Romeo & Juliet at The Half Moon in Herne Hill for Fuller’s charity partner, Special Olympics GB.

Seats were filled at each of the charity performances by those who benefit from the brilliant work that Future Youth Zone and Special Olympics do year-round, as well as their families and the charities’ team members. Over 100 primary school students attended Romeo & Juliet at The Plough – accompanied by teachers who were also invited to enjoy the performance.

Now in its eighth year, Shakespeare in the Garden offers Fuller’s customers the opportunity to enjoy alfresco productions from Britain’s greatest playwright. Produced by theatre company Open Bar, this year’s production sees two of the Bard’s favourites – Romeo & Juliet and The Merry Wives of Windsor – taking centre stage in pub gardens across the Fuller’s estate. The performances started on 9 July and will be running until 14 September 2019.

Special Olympics GB CEO, Michelle Carney, said: “Special Olympics GB were absolutely thrilled to be invited by our fantastic partners Fuller’s to this exciting and innovative event.  The performance by Open Bar theatre was accessible, witty and thoroughly entertaining – our athletes, family members and volunteers had a wonderful afternoon!”

Jane Jones, Fuller’s Director of Marketing, said: “I’m delighted that we have hosted these community performances. The three shows really represent what Shakespeare in the Garden is all about – making Shakespeare accessible and enjoyable for all. As we closed the garden off to the public for these performances, it added a real feeling of exclusivity and excitement for those in the audience. These productions were for their eyes only.

“The three performances were well attended and equally well-received by their audiences – as have the other productions so far this year. Tickets are still available for The Merry Wives of Windsor – so make sure you book before they sell out!”

A selection of photos can be downloaded here – https://we.tl/t-5AQmNmzt7e

More information and tickets for upcoming Shakespeare in the Garden performances are available here – https://www.fullers.co.uk/pubs/shakespeare-in-the-garden