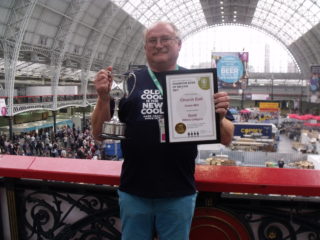 A Warwickshire brewery, originally located in an old coffin shop, has won the Campaign for Real Ale’s prestigious Champion Beer of Britain award on the opening day of the Great British Beer Festival at Olympia London.

Goat’s Milk by Church End scooped gold in the competition thanks to its blend of pale barley, crystal malt oats and aromatic hops.

The award comes after almost a year of local tasting panels and regional heats resulting in the best beers from across the UK being invited to compete at the Great British Beer Festival.

Final judging for the competition was held at the beer festival which opened its doors to the public on 8 August and will see more than 50,000 people visit to sample from more than 900 beers, ciders, perries and fine wines – including the chance to try the nation’s best beer.

Nick Boley, CAMRA’s National Director responsible for the competition said: “Congratulations to Church End for winning the Champion Beer of Britain award for Goat’s Milk, which is the highest beer accolade in the country. Goat’s Milk is a stand out beer – it has a lovely balance of malts and hops and a full flavour. It is a very fine example of a bitter and incredibly refreshing.”

Paul Hamblett, sales manager from Church End says: “Goat’s Milk is our biggest selling beer – it’s a nicely balanced beer with a hoppy edge. We originally brewed and named it for a festival taking place in the Goat pub, and the beer just caught on. It’s the first time we’ve won the competition, and we expect it to put us on the map.”

A paradise for beer lovers, CAMRA’s Great British Beer Festival is an event not to be missed with beers to suit all tastes and preferences. Make sure to work up a thirst before you arrive – this year the festival will be expanding its drinks offering of over 900 real ales and other craft beer, ciders and international beers to include for the first time fine English wine from some of the best wine producers in the country. Upon arrival you will have the chance to sample some fantastic London street food and listen to live bands in between the beers. If you are looking for some light entertainment, tutored beer tasting will allow you to not only sample a selection of beers but also learn how to best taste, appreciate and rate beers.

Beer lovers no longer need to wait 12 months for their next great beer festival – CAMRA will be introducing the Great British Beer Festival Winter shortly!

CAMRA, the Campaign for Real Ale, is a not-for-profit consumer group with over 188,000 members that has been operating since 1971. Our vision is to have quality real ale and thriving pubs in every community.