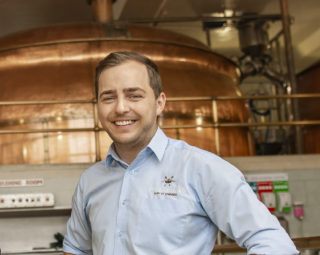 Greene King’s New Product Development brewer, Ross O’Hara has qualified as a Master Brewer from the Institute of Brewing and Distilling (IBD), making him the youngest to hold the title globally.

Ross, 28, who joined Greene King in 2016, has been studying for the IBD qualification for four years alongside his day job developing new products at the historic Westgate Brewery and overseeing Greene King’s apprentice brewers at its London microbrewery, Craft Academy.

There are currently 578 Master Brewers globally, with Ross the youngest to hold the qualification. Since joining Greene King Ross has been responsible for the development of new brands including the award winning Heritage range, Yardbird Pale Ale, Gluten Free Old Speckled Hen, Greene King’s Craft Academy range and all the brewery’s seasonal beers.

Master Brewer is the highest level of brewing qualification offered by the IBD and is a measure of the level of a candidate’s competence in the technical management of the brewing processes. The qualification is made up of five modules including ‘Raw Materials and Wort Production’, ‘Fermentation and Beer Processing’, ‘Packaging of Beer’, ‘Management and Regulatory Compliance’ and a ‘Practical Project’.

Head of Operations David Carr said: “This is a fantastic achievement and we are all proud at Greene King of Ross’ dedication and commitment to reaching master brewer level. He is passionate about brewing and has exceptional technical ability as well as flair and innovation. His enthusiasm shines through particularly when he is training our apprentice brewers, developing a new recipe or driving industry initiatives such as the new Brewing Apprenticeship.”

Ross added: “It’s been a lot of work to reach this level but well worth it. I’ve enjoyed the challenge and love to continue to develop my knowledge. I had no idea I was the youngest doing the course. Greene King has been hugely supportive of me studying for the qualification, encouraging me to run with ideas and draw on the heritage of the brewery to develop interesting new beers.”