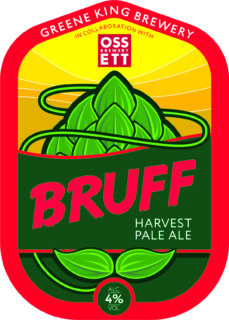 Bruff is a tribute to the best English hops around, fresh from the harvest and sees Greene King collaborate with the independent brewery to brew a delicious harvest pale ale.

This 4% ABV seasonal ale is named after the hop picking machine that is used on hop farms, including farms which are partnered with Charles Faram hop merchant, who Greene King collaborated with on this beer.

The freshest English hops have been used plus two brand new, experimental varieties of hops, which will be named in a competition across Greene King’s social media channels. Both are used to add aroma and bittering, helping to give Bruff sweet fruity characters.

A lot of skill, time and passion has gone into the English hop breeding programme over the past decade or so, and Greene King are delighted to be experimenting with new varieties, whilst championing the UK hop growers for all of their incredible work.

This sessionable pale ale will be available in October and November and will give drinkers the opportunity to celebrate the best of British hops.

Head Brewer Ross O’Hara worked closely with Ossett Brewery on the beer and said: “This has been a really great collaboration to work on and allowed us to experiment with some new, exciting hops.

“The beer has sweet fruit characters such as melon and peach, balanced with some zesty lime and grapefruit notes giving Bruff a brilliant taste for this time of year. We have really enjoyed partnering with Osset Brewery and thank them for all their help in bringing this seasonal ale to life.”