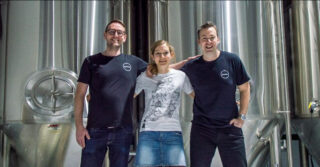 Hong Kong brewery Gweilo Beer has partnered with Vocation Brewery in Hebden Bridge to bring their Core Range of beers to the UK market for 2021. Gweilo is owned by Ian and Emily Jebbitt, and their friend Joseph Gould, who are all originally from the UK and relocated to Hong Kong, where the brewery launched in July 2015.

The partnership with Vocation Brewery began with the release of East & West Pale Ale in the UK earlier this year, which received great reviews from beer fans, and is now sold out online. It has continued with the arrival of Vocation beers in Hong Kong, which are proving popular in the Asian craft beer scene. The next stage of the partnership is the release of three Core Beers, which will be brewed at Vocation and launch in January 2021.

Co-founder Ian Jebbitt says “We are super excited about the unique partnership we have forged with Vocation in the UK and in Hong Kong, and can’t wait for our flagship core range beers to be available in the UK. We hope the people of the UK appreciate our beers and embrace them as a new favourite – if they don’t, my dad has a lot of beer to drink.”