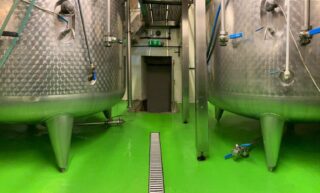 Surrey based Hogs Back Brewery has made sustainability integral to its business for many years with the growing, harvesting and packing of its hops on site, and the shift from plastic to returnable glass flagons.  It has now literally ‘gone green’ by painting its brewhouse floor a bright lime hue.

Matching the green that features prominently in logos for Hogs Back and its flagship TEA, the eye-catching new floor in the fermentation and conditioning rooms is also functional: the sealant provides a non-permeable surface to improve flow to the drainage and maintain Hogs Back’s high hygiene standards.

The floor isn’t the only improvement to the brewery; after rotten timbers were discovered in the Grade II listed building, a new ceiling and walls have been fitted, and new drainage and insulation installed.

Managing director Rupert Thompson said: “With its luminous green floor, the brewhouse looks more sci-fi than Surrey but we rather like it and will enjoy showing it off when brewery tours start again in June.

“The other improvements were about making a virtue out of necessity: just as lockdown started and pubs closed last year, we found the rotten beams – a real ‘double whammy’ of bad luck for a brewer. However, we’re really pleased with the refurbishments, which have effectively given us a ‘brand new’, 200-year-old brewery!

“It really epitomises our ethos of combining brewing tradition with innovation, and puts us in great shape for a return to pre-pandemic levels of demand for our beers now that pubs are reopening.”

Issued on behalf of: Hogs Back Brewery