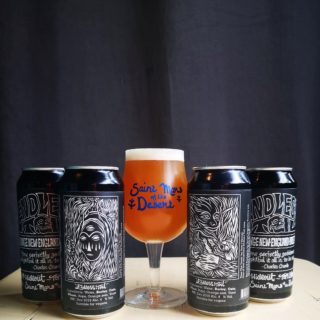 There’s been lots of talk about what the future of the high street entails; new food hall and retail space, Kommune, in Sheffield, is striving to be ahead of that vision. With its collective of ten independent kitchens and three retailers fueling locals’ eating and shopping appetites. Drawing in visitors from outside the region; having welcomed thousands of people through its doors in its opening months. The light, airy and bright industrial converted 1960s building known as Castle House is a captivating Brutalist architectural conversion from a team of Sheffield based entrepreneurs. Combining award-winning kitchens from all over the UK such as Baked In Brick (Street Food national award winners) to Sheffield awardwinning (via New Zealand) coffee outfit Tamper and Hop Hideout craft beer shop in the mix.

Jules Gray, Director of Hop Hideout shared, ”We were immensely proud to achieve this highly rated industry award. It stamped a seal of approval and credibility on all the hard work we’ve put in to Hop Hideout since 2013. Not only in retailing beer, but for our beer festival – Indie Beer Feast, our regular cycle and running club events in addition to our annual community event – Sheffield Beer Week.”

With an upcoming beer and art collaboration with new hotly-tipped Sheffield brewery Saint Mars of the Desert and artist Tom J Newell in the pipeline alongside meet the brewers and beer showcases. The beer shop continues to give customers an experience over and above the usual retail spectrum. Beer and food pairing is a continued focus for the Hop Hideout team; building towards ensuring all core beers have food pairings recommended from the wealth of indie kitchens they share the food hall space with. Now completely refrigerated in the mretail and cellar spaces; delivering superb beer quality is a paramount focal point ongoing.

As Jules shares, ”Hop Hideout is all about providing great quality beer in a welcoming and friendly environment for first time explorers all the way to beer aficionados. If we achieve that, we’re happy and that’s what ultimately drives everything we do.”