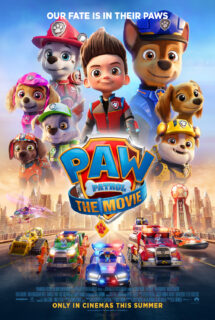 Marston’s has joined forces with Paramount Pictures UK to launch an exclusive PAW Patrol meal deal and collectable mask offer across 270 family pubs to celebrate the release of PAW Patrol: The Movie, launching in UK cinemas from the 9th August.

Exclusive to Marston’s Pubs, the kids’ meal deal offer will from 1st-31st August and will include a kids’ starter and main meal and one of six collectable PAW Patrol character masks and activity sheets.

The deal, which will be one of Marston’s biggest pub brand partnership deals to date, will also see the business become the sole licensing partner across the UK hospitality sector.

Joanne Jackson, Senior Marketing Manager at Marston’s who led the deal with Paramount Pictures said: “We are so excited to launch our exclusive PAW Patrol: The Movie offer into our Food locals and community pubs. We have seen the huge success that PAW Patrol has here in the UK, and with an average recall rate of 95-97% for children under 6 years old, we recognised the fantastic opportunity it gave for us and our pubs to get involved with.”

PAW Patrol: The Movie Marston’s Offer works in partnership with Paramount Pictures. Offer and costs can differ per pub and Terms and Conditions Apply.

The PAW Patrol is on a roll!  When their biggest rival, Humdinger, becomes Mayor of nearby Adventure City and starts wreaking havoc, Ryder and everyone’s favourite heroic pups kick into high gear to face the challenge head on.  While one pup must face his past in Adventure City, the team finds help from a new ally, the savvy dachshund Liberty.  Together, armed with exciting new gadgets and gear, the PAW Patrol fights to save the citizens of Adventure City! Joining the PAW Patrol in their thrilling first big screen adventure are members from the original series’ cast along with Iain Armitage, Marsai Martin, Yara Shahidi, Kim Kardashian West, Randall Park, Dax Shepard, with Tyler Perry and Jimmy Kimmel and introducing Will Brisbin.

For more information about Marston’s, please contact Lauren Hagan on lauren@thevitalagency.co.uk or 07792 272847