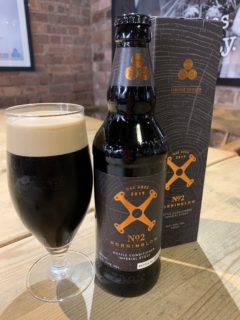 Marston’s have brewed an Imperial Stout using the iconic Burton Union method for the second in its limited-edition series of Horninglow Beers.

No. 2 Horninglow, a 7.4% Imperial Stout, is the first time that Marston’s Union sets have ever been used to brew this beer style.

The beer celebrates a style that boosted the Midlands brewing town of Burton Upon Trent long before John Marston established the Horninglow Brewery in 1834. In the 18th Century stout was at the height of its popularity in a rapidly industrialising England. It was reputedly favoured by Russia’s Tzars, Peter The Great and Catherine The Great, earning the strong, darks brews their ‘Imperial’ moniker.

Pat McGinty, Head Brewer at Marston’s said: “The burgeoning Baltic trade combined with a newly navigable route from Burton to the Baltic via the Trent allowed Burton to scale up and to compete with the London brewers – and may be why John Marston had the confidence to set up his own brewery in the town.

“I’ve searched through all the brewers’ records and can’t find any mention of an Imperial Stout, so I think this is a first for the Burton Unions.”

No. 2 Horninglow Imperial Stout is brewed using five English roasted grains for flavour, body and refreshment, water from Marston’s own well and Marston’s Union yeast with the English Challenger hop for bitterness and aroma. It is bottle conditioned for a full English taste experience.

Each beer in the Horninglow series is a celebrated style of beer brewed in one of Marston’s Union sets to produce a limited volume of the beer. Each Union set consists of twenty-four x 150-gallon Union casks capable of brewing just over 32,000 x 500ml bottles. Each bottle is marked with its unique limited-edition number.

No. 2 Horninglow Imperial Stout is sold exclusively in Waitrose from early November 2019 onwards in 500ml bottle, packed in a foil embossed box. It is also available in all of Marston’s brewery shops for International Stout Day on 7th November.