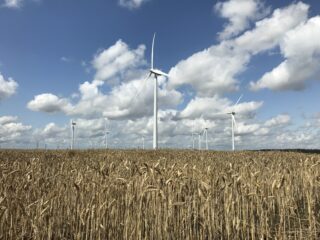 Molson Coors Beverage Company, maker of Carling, the UK’s number one lager, as well as the iconic Coors, Doom Bar and Aspall Cyder, has become the first major brewer in the UK to produce all of its beers and ciders using 100% renewable electricity.

The business has signed a Power Purchase Agreement (PPA) with RWE, one of the world’s leading renewable energy companies, to supply its UK operations with electricity generated from the Tween Bridge wind farm in South Yorkshire. Under the terms of the 10-year agreement RWE will deliver around 75 gigawatt hours of green electricity per year.

The 22 turbines at Tween Bridge will provide the electricity required to power all of Molson Coors’ UK sites, including the breweries at Burton, Tadcaster and Sharps in Cornwall, as well as the Aspall Cyder House in Suffolk, all offices, the national distribution centre and the national call centre in Cardiff.

The long-term agreement means that, for the first time, all of the more than 1 billion pints Molson Coors produces in the UK in an average year will be made with electricity from 100% renewable sources. In an average year Molson Coors consumes the same amount of electricity as around 25,000 households – or the population of the business’ historic UK brewing home in Burton-upon-Trent.

Globally, Molson Coors has signed up to the Science Based Targets initiative as part of its Our Imprint 2025 goals and committed to a series of emissions targets in line with the 1.5oC goal set out in the Paris Climate Change Agreement. As part of this plan, Molson Coors committed to reducing its carbon emissions by 50% across all of its direct operations by 2025. The PPA agreement sees the business on track to meet that milestone in the UK – four years ahead of schedule.

Fraser Thomson, Operations Director, Western Europe at Molson Coors Beverage Company said: “One of our values at Molson Coors is taking accountability, and that includes being responsible for the impact our business has on the environment. That’s why we’ve made such bold commitments to play our part in tackling climate change – because it is the right thing to do. We know that this matters to our people, our customers and consumers, and they can now be assured that everything we do, and every pint we make, is powered by 100% green electricity.”

Tom Glover, Chief Commercial Officer at RWE Renewables, said: “We are pleased to support Molson Coors in reducing its carbon footprint. With our broad portfolio of renewable assets, we are among the largest producers of green power in the UK, one of our core markets. We are delighted to enter into long-term partnerships with pioneers like Molson Coors, as this demonstrates that climate protection is possible under market conditions. RWE is committed to a carbon-neutral future and we´re constantly expanding our renewables portfolio to achieve this.”

Press release from City Press on behalf of Molson Coors