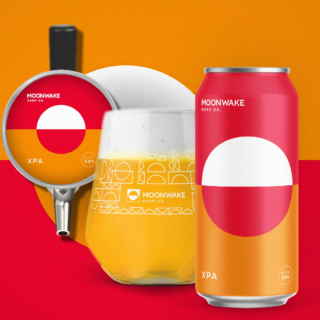 The 3.4% Extra Pale Ale is super sessionable and full of flavour.

Moonwake’s latest beer and new addition to their core range is a 3.4% XPA, being released this Thursday. The beer is super sessionable with its soft and pillowy mouthfeel and full of flavour with notes of Apricot.

Head Brewer Vinny Rosario said: “We wanted to brew a refreshing sessionable beer that does not compromise on flavour.”

“Small and punchy, this beer is brewed with Rakau and El Dorado hops for pleasant apricot and passionfruit flavours. Extra pale malt, oats and wheat in the grist provide a pillowy mouthfeel.”
Find the beer on tap and in cans in various independent pubs and retailers as well as in Moonwake’s taproom and on their online shop from Thursday 04.08.22.

Moonwake: “the moon’s reflection on a body of water” speaks to the brewery’s Leith Shore location, the importance of water as an ingredient, and our beer’s reflection of our collective experience.

Directors and brewers Vinny Rosario and Finlay Heslop founded Moonwake Beer Co. in 2021. They started their beer careers on opposite sides of the world, Vinny in New Zealand and Fin in the UK. They bring over a decade of experience in brewing to Moonwake, for both of them it is their creative outlet.

Find out more about our journey on our blog.