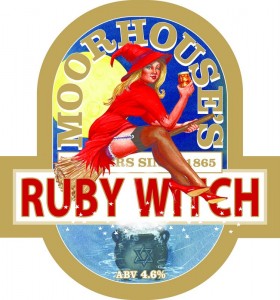 Moorhouse’s is set to bewitch cask ale enthusiasts for Halloween with the roll out of seasonal brew Ruby Witch, its own themed beer festival and a selection of blended ales.

The Burnley brewer’s acclaimed brands pay tribute to the legendary witches of local landmark Pendle Hill. Recent years have seen sales surge some 35 per cent during October as Moorhouse’s has become the foremost Halloween brewer. This year business is expected to hit a new high as reward is reaped from a new multi-million brewing complex.

The investment will be celebrated this year an inaugural Halloween Beer Festival in the spacious visitor centre. Held on the evening of Friday 26 and all day Saturday 27 of October some twenty Halloween ales will be available, with several guests featuring alongside Moorhouse’s own beers.

Entry for each session is £3 but reduced to £2 for those wearing witch fancy dress.

David Grant, Moorhouse’s managing director, said: “Once again we are rolling out a bewitching range of ales to celebrate the Halloween season. Ruby Witch is an extra special grist brew to capture the mood of the season, while our blends offer some fun beers alongside core award winning brews. We produce the blends to support publicans at this time of year who want to make the best of the season, but we make it very clear that they are simply quality blends derived from our famous five core ales.

“Now we are in the new brewery we are also holding our first Halloween beer festival to firmly mark our ground as THE brewery for the witching season, despite the claim for the title that some other brewers have made.”

Moorhouse’s expects Halloween to bring further focus to its online ‘Pardon the Pendle Witches’ campaign which makes the case that in the 1600s there was a gross miscarriage of justice because of the turbulent social climate. To support the campaign visit www.moorhouses.co.uk

The new brewing complex opened in 2011 to treble capacity to more than 1000 barrels-a-week and sales have already risen by 36 per cent to hit a £4m turnover.

Founder William Moorhouse established his drinks manufacturing business in Accrington Road, Burnley, and Lancashire in 1865. Originally it produced mineral waters and then low strength hop bitters for Temperance Movement bars. Moorhouse’s began full strength brewing in the 1970s and in the eighties Manchester businessman Bill Parkinson bought the then ailing brewery ‘because he liked the beer’. Now, Moorhouse’s directly supplies several hundred pubs throughout the North West, Midlands and Yorkshire, while distributing nationally via leading wholesalers and major pub chains.