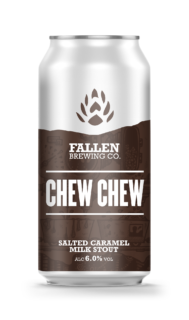 Fallen Brewing, the innovative Kippen railway station based award-winning Scottish craft brewery, has announced an exciting new brand repositioning. From larger can sizes to a refreshed design, the range will look and feel different but fans can still enjoy the same great tasting beers.
The new-look range offers a rainbow kaleidoscope of colour, making it easier to identify each variety. The repositioning was designed in collaboration with Erik Porter of Union Creative.  The redesign brings a completely fresh look and feel to Fallen’s great tasting beers, which include the aptly named Local Motive, Chew Chew, and much-loved Platform C.
Erik Porter, Managing Director of Union Creative says; “I’ve worked in the design industry for 25 years, and was involved in the original Brew Dog branding at my previous agency. A few years ago, I set out as a freelance designer with an eye on the craft beer industry”.
Uniquely, the new labels feature pen and ink artwork designed by GP, artist, and close friend of the brewery owners Zain Kapasi. The illustrations feature stylised trains and railway scenes, the signal box from the old Kippen Railway Station, and other iconic Scottish landmarks. Paul Fallen, Founder of Fallen Brewing comments; “Zain’s illustrations were exactly what the coloured designs needed. They add texture and interest to the cans and each drawing is unique. We are delighted to have worked with Zain on the rebrand”.
The new designs will help with variety recognition and differentiation. Fallen says: “The monotone designs were great when we started and have served us well but we felt it was time for a change. The new branding is fresh but familiar and should give us a better presence on the bar and in stores with instantly recognisable colours for each beer.”

Fallen continues, “We were one of the first craft breweries in Scotland to install a canning line back in 2016 and at the time the fledgling craft can market was dominated by 330ml cans. The indie market has shifted towards 440ml cans so we felt it was time to update the canning line. We are now able to fill both formats (330ml and 440ml) and will be launching the rebrand exclusively in 440ml cans.”

Fallen Brewing’s range is vegan, sustainable, and environmentally robust. And with Fallen Brewing’s ongoing commitment to only using the highest quality ingredients, these credentials make them the ideal beer brand to stock for those looking for craft beers with a difference.
The brand, which recently withdrew listings of its range from all supermarkets and severed ties with Molson Coors, announced a dedicated commitment to independent beer wholesalers and shops, restaurants, and bars across the UK at the end of July 2020.
Fallen Brewing, one of Scotland’s leading craft breweries, is situated in the old Kippen Railway Station with views towards The Trossachs and The South West Highlands.
~ Ends ~
For more information, images or samples available contact Amy Goodier-Porter or AJ Sharp of Sharp Relations amy@sharprelations.com or aj@sharprelations.com 07973387216
Notes to Editors
Fallen is pronounced “Pha-Lin”
Fallen Beers include;