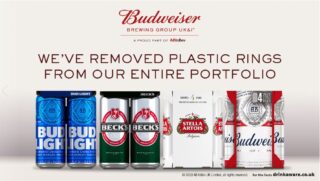 From this week, all of Budweiser Brewing Group UK&I beers will be produced completely plastic-ring free. Together with 600 tonnes decrease in plastic shrink wrap, the brewer has removed 850 tonnes of plastic waste from its supply chain, equivalent to the size of 10 blue whales or 67 double decker buses.

Budweiser Brewing Group UK&I has announced that the barley used for its UK-produced beers is now 100% sourced from British farms,  eliminates the need to import barley and therefore reduces carbon emissions, whilst championing British agriculture. Prior to 2014, the brewer imported 100% of the barley used for Budweiser as it claims the properties required to brew the beer were not available in UK-grown barley. However, by colloborating with agronomy, grain trading and malting partners – including Agrii, Glencore Agriculture UK, Boortmalt and Crisp Malting Group – the brewer has introduced a new type of grain (known as Explorer) to the country which meets the specific standards. Through working with partners, Budweiser Brewing Group has managed to produce enough barley for its brands – including Budweiser, Stella Artois and Corona – at its breweries in Magor in South Wales and Samlesbury in Lancashire.