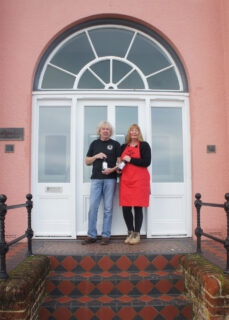 Dave and Mandy Cornell, owners of the Poppyland Brewery, on the steps of the former Tucker's Hotel in Cromer, where the Empress Elizabeth of Austria once stayed, with bottles of the award-winning Empress lager

A North Norfolk brewery is celebrating after winning an award in a prestigious global beer competition for its first-ever lager.

Poppyland Brewery, in Cromer, which was founded in 2012, had never brewed a lager until this year, when owner Dave Cornell brewed a Vienna lager under the name Empress.

Now Empress Vienna Lager has been awarded a bronze medal in the 2021 International Beer Challenge against competition from hundreds of brewers from 15 different countries across the world, including Germany, Belgium, the Czech Republic, the United States, the Netherlands, Brazil, Japan, Italy and Spain.

Dave Cornell said: “I’m delighted that our very first attempt at making a lager at Poppyland has been so successful. It was a one-off, as are most of our beers, but we will almost certainly be brewing it again next year after this win.”

Dave’s brother is Martyn Cornell, a long-standing member of the British Guild of Beer Writers, who is himself currently short-listed for a possible prize in the annuak BGBW awards

Vienna lager is an amber-coloured beer invented, as the name implies, in the capital of Austria in the 1840s. It was very popular for more than 80 years before losing sales to pale-coloured lagers such as pilsners, but it is still brewed in countries such as the United States and Mexico. Since the start of the 21st century, however, there has been a small revival in the brewing of Vienna lagers, as drinkers appreciate the beer’s malt-driven flavours, which match very well with foods such as grilled meats.

Poppyland’s take on the style is named after the Empress Elizabeth of Austria, wife of the Austrian Emperor Franz Joseph, who stayed at Tucker’s Hotel in Cromer in the summer of 1887. It was brewed with Vienna malt, German Pilsen malt and a tiny tough of a, secret speciality malt, and Perle, Styrian Aurora and Styrian Celeja hops, plus Munich lager yeast, to give an abv of 5.3 per cent.

The win for Empress Vienna Lager is the second beery success this year for Poppyland Brewery: in April its Sweet Chestnut Ale won a silver medal in the London Beer Competition. The International Beer Challenge has been running for 25 years. The chairman is Jeff Evans, an internationally-published beer writer, and the judges include brewers, beer buyers, beer retailers, writers and broadcasters.

Empress Vienna Lager is available in 500ml bottles from selected retailers or from the brewery at 46 West Street Cromer – check here for opening hours: www.poppylandbrewery.com/contact-us/ – or contact Dave Cornell at dave@poppylandbrewery.com or on 07802 160558.