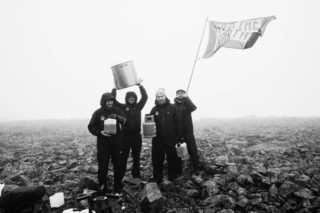 The UK’s highest altitude beer was launched this week, after the team at Northern Monk hiked 4,000 feet up Ben Nevis, the UK’s highest peak, to brew it.

Four of ‘The Monks’ hiked the peak in grueling conditions back in August, carrying 90KG of equipment for the durations of the climb. The 11% ABV Barrel Aged Imperial Stout is made from ingredients foraged from the mountain itself, including blaeberries and the famous ‘Dew of Ben Nevis’ water.

Once carried down from the mountain, the brew spent 2 months ageing in a whisky barrel donated by the Ben Nevis Whisky Distillery in Fort William.

Due to their exclusivity, the first 10 bottles came with a price tag of £1,000 per 330ml bottle. These sold almost immediately, paving the way for others to purchase the remaining 40 bottles at £150 each.

Those interested in purchasing this unique and limited edition product have an added incentive – all proceeds taken from the sale of the Ben Nevis beer will be donated to the For the North Foundation, a grant scheme created by Northern Monk back in September which dedicates all funding to projects that are ‘designed to benefit the North, its people and its communities’.

The first bottles of the Ben Nevis beer were auctioned off at an event at the Northern Monk Refectory in Manchester on Thursday 7th November, alongside an exclusive screening of a 20-minute documentary of the climb. More than £7000 was raised on the night ensuring funding for the first project.

Due to the incredible early response, the first two projects have already been selected to receive a £5,000 grant. The first, Meanwood Valley Urban Farm, has worked alongside the Leeds community for over 40 years, bringing country life and important skills to some of the most disadvantaged and vulnerable people in the inner-city area through volunteer-led training programmes.

They are going to use the funding to develop and run a new volunteer programme for their market garden in 2020 and purchase critical infrastructure that will restore previously neglected sections of this area. It will allow the market garden to double the amount of produce grown, in turn increasing the amount of fresh seasonal fruit and veg boxes they can deliver to the local community, directly addressing the food needs of the area.

The second is a donation to the Jon Muir Trust, who work to manage visitor impact to Ben Nevis. Northern Monk made it a clear focus to leave no trace of their visit to the summit, and the John Muir Trust helps educate others on the importance of doing the same.

Northern Monk Founder, and one of the Monks tasked with completing the high-altitude brew, Russell Bisset, said: “This has been a groundbreaking project to be a part of. When we launched the For the North Foundation, our intention was to create pieces of high-impact activity that will raise awareness and encourage donations. Brewing the UK’s highest altitude beer at the summit of Ben Nevis seemed like a pretty good place to start! To have raised over £7000 for the Foundation at our very first fundraising event is incredible.

“Since we launched the Foundation mid-September, we’ve received grant applications from so many thoroughly deserving causes. Together we’re going to be able to make a real difference to our communities, and our environment.

“We’re excited to announce Meanwood Valley Urban Farm as the recipients of our first grant. They’ve worked alongside the Leeds community for over 40 years, bringing country life and important skills to some of the most disadvantaged and vulnerable people in our area through their dedicated, volunteer-led training programmes.

“Thank you to everybody that’s donated the For the North Foundation so far, your contribution has enabled us to fund our very first grant, and we can’t thank you enough for your support.”

To find out more about the For the North Foundation and learn how to purchase a bottle of the Ben Nevis beer, visit: www.northernmonk.com/for-the-north-foundation.

For further information about the For the North Foundation or Northern Monk in general, please contact Victoria Tidmarsh or Alex Halls at northernmonk@hatchpr.co.uk

Northern Monk is an independent brewery focused on creating the best beer experiences in the world. From a parent’s cellar in 2013, to exporting to 23 countries in 2019, Northern Monk is one of the North’s fastest growing drinks companies.

Northern Monk moved into Holbeck’s Old Flax Store site, a Grade II listed mill, in October 2014, where you can find the brewery, The Refectory tap room and Chapter Hall event space. In April 2017, Northern Monk expanded into their Sydenham Road site which houses a much larger brewery, warehouse and storage facility and the company’s head office.

In March 2018, Northern Monk launched Northern Rising, an equity crowdfunding campaign where the business surpassed its £500,000 target in just 3 hours, with the funding closing at a total of £1.5m raised through 2,161 investors. The funding enabled Northern Monk to triple capacity with the installation of 8 x 10,000 litre fermentation tanks and a new canning line, open the brewery’s second tap room in the heart of Manchester’s Northern Quarter, and complete a full brand refresh which launched in January 2019.

Northern Monk started life in a parent’s cellar with a £5000 gift from a grandparent. Inspired by these origins and an ambition to give back wherever they can, they launched the For the North Foundation in September 2019. The For the North Foundation will see £5000 grants offered to businesses, charities and projects which aim to provide a genuine benefit to the communities they serve, or reduce environmental impact in the North.

Community and collaboration are at the core of Northern Monk’s business, they focus on working with the people that share their passion, and their values. They regularly collaborate with national and international breweries, businesses and causes to help strengthen the North for positive change.