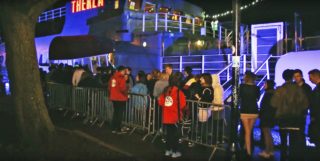 Caption to attached image: Drinkaware Crew engage with customers outside Thekla in Bristol

As thousands of pubs, clubs and bars gear up for the start of the new academic year in September, alcohol education charity Drinkaware is urging operators to make sure they’re creating a safe environment for their student customers, particularly freshers.

Drinkaware Director of Business Development and Partnerships, Rommel Moseley, said, “Many students enjoy alcohol responsibly during Freshers’/Refreshers’ Week without causing any harm to themselves or others.

“However, the sheer number of students visiting pubs, clubs and bars at the start of term inevitably means a raised likelihood of alcohol harms. Responsible operators will want to create an environment that both helps students to moderate their alcohol consumption, and supports those who might become vulnerable after drinking too much.

“Freshers are particularly vulnerable, being away from home and family, perhaps for the first time, in a new city, with a new group of friends who may have different drinking behaviours. In this period of adjustment, it’s easy for things to go wrong.”

He adds, “We’d encourage operators to put plans in place now for Freshers’ Week, and explore the resources Drinkaware can offer, which include our Drinkaware Crew teams and Alcohol Vulnerability Awareness e-learning course for staff members.”

Both Drinkaware Crew training, which has now been delivered in 21 areas across the country, and the e-learning course, can help staff to recognise and deal with the drunken sexual harassment that has become an unwelcome part of a night out for many young people. To tackle the issue, Drinkaware last autumn launched ‘It’s OK to Ask’, a campaign encouraging bystanders to intervene safely when they witness sexual harassment.

Moseley added, “Operators can play their part by supporting bystanders who come to them for help and by taking the issue seriously, helping to foster a positive and safe social environment where drunken sexual harassment is not tolerated.”

Live music venue operator DHP Family was the first to introduce Drinkaware Crew, back in 2015, at its Rock City site in Nottingham and teams are still in operation there, as well as at Thekla in Bristol. Both venues deploy Drinkaware Crew when the GM feels it appropriate – for big nights, like Rock City’s ‘Crisis’ weekly student night, and any events where customers might be at particular risk of vulnerability, which can include Freshers’ Week.

Drinkaware Crew are additional members of the venue’s team, who receive special training to support young people who may be vulnerable as a result of drinking too much. They work in pairs, wearing branded Drinkaware Crew clothing for easy identification, offering assistance as needed and helping to create a more positive atmosphere in the venue.

Victoria Heaps, HR Officer at DHP Family, explains, “Drinkaware Crew talk to customers queuing to enter the venue, which helps to build rapport with them. Experienced team members can identify the people most likely to be vulnerable later.

“Inside the venue, Drinkaware Crew help in many ways, whether just listening to a distressed customer or helping them deal with the unpleasant effects of too much alcohol. They carry bottles of water for customers who need it, and lollipops – which can defuse tense situations as nobody can be threatening with a lolly in their mouth!   At the end of the night, they help to get customers home safely, by reuniting them with lost phones or friends, or making sure they know where the bus stop is.

“Our motto is ‘Make Sure Everyone Has A Good Time’, and that includes staying safe, so we saw the value of Drinkaware Crew from the start. They are effective because they’re recruited specially for the role – we tend to attract people from caring backgrounds, like social care students – and they really love doing it. We take on students in their second year upwards, so they have a bit of experience, but they’re peers to our customers, so their advice is followed more readily than if it came from an older ‘parent’ figure.

“Drinkaware Crew are a fantastic additional resource in our venues. Management, and other team members, love them as they improve the safety and wellbeing of customers as well as freeing up other staff, like bartenders and security, to focus on their jobs.”

If your bar is targeting new or returning students, plan well ahead for Freshers’ Week, particularly if you are going to recruit additional staff for the busy nights at the start of the new term.

Drinkaware is an independent UK-wide, alcohol education charity with the objective of positively changing public behaviour and the national drinking culture. It aims to reduce alcohol misuse and minimise harm by helping people make better choices about their drinking. It achieves this by providing impartial, evidence-based information, advice and practical resources; raising awareness of alcohol and its harms and by working collaboratively with partners, including the medical community, public health, third sector organisations, local authorities, police and the drinks industry.  For further information visit www.drinkaware.co.uk

Drinkaware has more than 120 funders, including UK alcohol producers, retailers in the on-trade and off-trade and wholesalers.