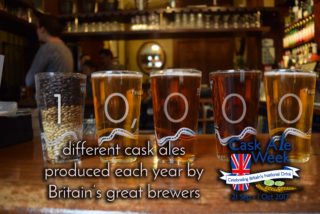 People who drink real ale spend £1,030 a year on food and drink in pubs. This is 30% more than average pub-goers and 6.5% up on two years ago. Cask ale drinkers are the most frequent users of pubs, with two in five (42%) visiting once a week or more – and they bring their friends.

Highly significantly to licensees, it was also found that 90% of real ale drinkers don’t have a specific budget in mind on their trips to the pub. This suggests that there may be opportunities to attract more money into the till.

Only 25% of managers, 16% of tenants and leaseholders and 14% of freehouse operators believe there is an opportunity to increase any cask ale prices. “Licensees may be overly cautious in their attitudes to pricing,” comments Paul Nunny, who is responsible for creating the Report. “The research shows 69% of real ale drinkers to be in the more affluent ABC1 demographic. It also shows that cask ale drinkers will pay up to 20% more for a quality product.”

He points out that craft keg has in any case set a precedent. “Beer drinkers are frequently paying more than 50p extra for a pint of craft keg beer.

“56% of craft drinkers think cask is craft, as opposed to just 8% who believe keg to be craft. The opportunity is clearly there to close the pricing gap. Just a 20p increase per pint for a pub selling 100 barrels of cask ale a year would mean an additional £5,000 income.”

Nunny says that if customers are seeing a pub’s cask beers as ‘commodity’ products, then something is wrong. Licensees should be asking themselves three things:

Any uplift in pricing is dependent on getting things ship-shape across the board. “Cask range and quality need to be spot on. More than this: for cask beer to reach its profit potential, the overall pub offer, service and atmosphere also have to be right. 94% of cask drinkers say atmosphere is the key element when they are choosing where to drink.”

The rewards for doing things well are clear: two thirds (65%) of pubs focussing on a quality cask beer offer say sales are growing. The halo effect of cask means any pub experiencing a growth in cask can expect to see a boost in trade for other drinks categories – and food too.

“Of course, it’s sensible to create a pricing ladder with flexibility, allowing for at least one entry-level cask, at the same time as maximising the value from top notch brands,” says Nunny.

One of the key findings from the Report is the positive impact real ale has on the economy. Trips to coffee shop or restaurant chains are one thing. But visits to the pub for a glass of real ale with its British ingredients are quite another in terms of helping boost the local and national economy.

Every pint ordered gives a lift to the nation’s booming brewing industry, and helps to create jobs and keep local pubs open. Each job in brewing generates 18 jobs in pubs, one in agriculture, one in the supply chain and one in shops.

An example of the contribution brewing is making to the British economy is from SIBA, which has 840 brewery members. 22% of them made capital investments of over £50,000 last year, and half of those of over £100,000. 125 members are expecting to double production, sales and turnover by 2018.

According to CAMRA, three new breweries are opening every week, and there are now more than 1,700 breweries across the country. Between them, they are producing over 10,000 different cask ales a year. With the increasing adventurousness of brewers, and growing experimentation with beer styles, choice has never been better.

Nearly half of Britons and 70% of real ale drinkers recognise the vital role cask ale plays in supporting the economy. The country’s cask ale brewers use barley grown and malted in Britain – and awareness of the drink’s artisan production using British ingredients is increasing.

“People may choose to drink real ale for its naturalness, flavour, aroma, texture and mouthfeel,” says Nunny, “but they tend to like the fact that it supports the local and national economy, generating jobs and boosting choice.”