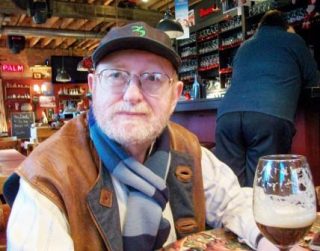 Chris Pollard, known universally as Podge, did not consider himself much of a writer, yet with his muse and foil Siobhan McGinn, he penned six books, three of which were ground-breaking.

We first met in a bar on the Belgian coast in 2003.  Not quite fat, subtly bespectacled, wire-bearded in ginger-grey and sporting an unseasonably short-sleeved Caribbean shirt, his Burnley accent untrampled by decades in Essex.

He had this idea that lambic beer was on its last legs and in passing would also bring to an end a culture of Payottenland cafés run by ageing widows, who used nutcrackers to pluck the corks from bottles of gueuze.  Something must be done.  His ridiculous idea was to compile a guidebook to what remained.  Was I interested?

His best ideas were the daftest, his thoughtfulness easily mistaken for naiveté.  I raised a few obvious objections but with affably relentless persistence he won the day.

Creating the first edition of LambicLand was a triumph of determination over good sense.  We discovered a book for selling needed an ISBN number, a right granted only to bone fide publishing companies, so we created Cogan & Mater, the name a nod to CAMRA’s first effort, Alma Books.

He reckoned that a book about a niche beer culture in a semi-rural area just beyond the Brussels Ring would likely sell, ooooh, a couple of hundred copies – even more if it we included Flemish Dutch alongside the English script.  The cost per copy remained astronomical so we decided to go full colour and double the print run to 2,000.  What use is money if you can’t record a culture for posterity?  The printers overran by 400 copies but getting the joke threw the extras in for free.  We sold every one.

Fifteen years on, I have little doubt that Podge’s daft idea helped to save lambic from extinction, in turn striking a major blow for the survival of beer diversity and, inadvertently, paving the way for today’s legions of lesser ‘sour’ and ‘wild’ beer styles.

He did it again with his Around Town in 80 Beers proposal for a book series, proving the viability of this odd format by compiling with Siobhan three editions of Around Bruges and in 2007 Around London, a commercial flop that was nonetheless an important early driver of the capital’s emerging craft beer scene.

Yet it is in Belgium that he will be most mourned, many a well-meaning but otherwise chaotic café entrepreneur owing him their livelihood.

Podge’s ability to spot and describe what makes a café great was unequalled.  Always convinced that he could not write a sentence, in truth his observations took you right to the heart of a place, with priceless advice, such as “The Dalmatian is deaf.”

His infectious enthusiasm for all things Belgian knew few boundaries and his ability to discover cafés, through a combination of assiduous research and prodigious networking, was awesome.  His leads assisted the itineraries of the coach tours he ran and for two decades have populated most guides to the country’s bars and beers.

It helped that he was also a hell of a good bloke.  A lot will miss him but many more will miss his work.