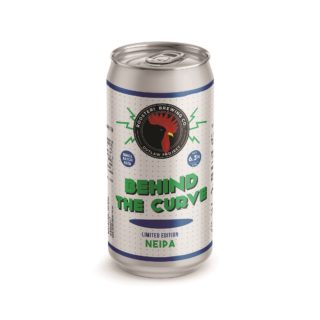 The six new beers have been created to mark the relaunch of the independent, family-owned brewer’s Outlaw sub-brand, which had lain dormant for several years.

The first six new beers to be launched under the Outlaw Project include a German-style beer, a sweet stout and a range of American IPAs:

Oliver Fozard, Head Brewer at Rooster’s, said: “The Outlaw Project provides us with the perfect platform to push the boundaries of modern craft and channel the pioneering creativity we’re known for.

“Innovation, consistency and quality sit at the heart of everything we do, and these six beers mark the start of an ongoing series of exciting, experimental beers we’ll be bringing to the market.”

Each of the beers is being made available to on and off-trade customers – on a first-come, first served basis – with deliveries beginning from March 2nd.  Beer fans will be able to purchase the beers (except for Monkey Tennis? which is cask only) in 440ml cans through Rooster’s online shop while stocks last from Friday 28th February. The online shop prices per 440ml can are: Loud Noises (£3.79), Scoundrel (£3.69), Go Backer (£3.29), Slow & Low (£3.09), Behind The Curve (£3.49).

The relaunch of the Outlaw Project follows the completion of an 18-month project which saw Rooster’s move from its former home near Knaresborough to a new, purpose-built 20,000 square-foot site at Hornbeam Park in Harrogate – the town where it was first founded by Sean Franklin in 1993.

The new brewery, designed by Head Brewer Oliver Fozard and British-made using equipment sourced from UK manufacturers, will enable Rooster’s to almost double its production capacity immediately, with opportunities to expand and increase this further in the long-term.

Commenting on the company’s expansion, Director Ian Fozard, said: “The new brewery enhances both our brewing capabilities and our competitiveness in the marketplace, and means we’re exceptionally well placed to service the growing demand for our range of award-winning beers, both in the UK and further afield.”

Rooster’s will officially unveil the new beers at a ticketed Outlaw Project launch dinner at its taproom on the 25th February.

For further information or images, please contact Matt Thompson on mattthompsonpr@gmail.com or 07587 418710.

As one of the originators and pioneers of the craft beer movement, independent, family-owned Rooster’s Brewing Co. has been creating consistently quality, award-winning traditional and craft since 1993. Beer is currently packaged in traditional casks, as well as keg and can.

Three decades on, Rooster’s continues to turn heads with its uncompromising, forward-thinking approach to brewing a wide range of consistent, easy-drinking, well-balanced beers that always deliver on quality and flavour.

Rooster’s ethos has always remained the same; to consistently brew quality, easy-drinking and well-balanced beers that always deliver on quality and flavour.

Rooster’s takes a pioneering, forward-thinking approach to brewing beers, fusing creativity and innovation with traditional brewing techniques to create modern classics. Its ten-strong core range consists of a variety of different beer styles, available in cask, keg and can, from more traditional porters, pale ales and a traditional bitter, through to flavourful craft ales, pilsner/ale hybrids and a sour beer – with all of these being vegan friendly.

In February 2020, Rooster’s announced the relaunch of the Outlaw Project in a move that will see it produce an ongoing series of flavour-packed limited-edition beers.

Rooster’s has won dozens of awards for its beers, both in the UK and further afield. Some of the most notable include the gold won at the 2017 International Brewing Awards by Baby-Faced Assassin in can. In 2019, Yankee in keg won gold at the SIBA National Beer Competition, having also won gold in the regional competition.

Rooster’s beers are available in pubs and bars across the country and stocked in retailers ranging from the likes of Waitrose, Morrisons and Sainsbury’s through to smaller, specialist independent beer sellers. Rooster’s exports its beers to several countries, including Sweden and Italy, with this list growing all the time as word spreads