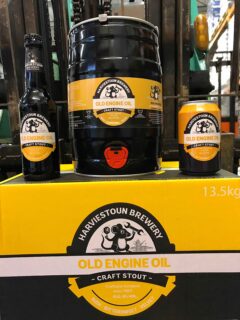 One of Scotland’s most awarded independent craft breweries is backing ‘International Stout Day’ on Thursday 5th November with the launch of a new online exclusive and first online stout tasting event.

International Stout Day is a worldwide celebration of the dark, malted brew now savoured the world over.

To mark the occasion, Harviestoun Brewery, based in Alva near Stirling, is rolling out its craft stout ‘Old Engine Oil’ in a new mini-keg format [4.5% ABV]. For the first time, Old Engine Oil will be available to buy in the five-litre pack from Harviestoun’s online shop, with next day delivery around Scotland and the rest of the UK.

To help give people a thirst for the classic craft stout, the brewery is also staging its first Instagram Live stout tasting event hosted by its Master Brewer, Stuart Cail, and one of Scotland’s top drinks writers, Peter Ranscombe.

From 5.30pm on Thursday 5th November, craft ale enthusiasts will get the rare opportunity to enjoy a stout masterclass and go behind-the-scenes at Harviestoun Brewery from the comfort of their own home. Not only will people can the chance to learn more about the drink itself, but they’ll also find out how OId Engine Oil is the perfect companion to enjoy with a venison casserole or rich chocolate cake.

Stuart Cail has been Master Brewer at Harviestoun for over 20 years. He said: “We’re really excited to be celebrating International Stout Day this year by paying tribute to our very own craft stout. Not only is Old Engine Oil now available online as a mini-keg for the first time, but we want to encourage craft ale lovers far and wide to join our first ever Instagram Live stout tasting event on 5th November.

“Old Engine Oil is beautifully engineered with premium roasted malt for a velvety mouthfeel. It’s proper vintage stuff. If you pull up at the brewery and open the car door you always know straight away if they’re making Old Engine Oil. You can smell it. It’s such a distinct grist – roast coffee, with slight chocolatey flavours.

“We wanted to brew a strong, beer that was rich and full but dark. We also wanted a fuller flavour, so we used masses of roast barley and altered the temperatures of the process to allow some residual sugar to remain in the beer. What was left was full-flavoured and viscous, so we called it Old Engine Oil.”

Old Engine Oil is also available to enjoy on draught from selected bars and hotels around Scotland, including Bridge of Orchy Hotel and Whistlefield Inn at Dunoon in Argyll; Cameron House Hotel and Slanj at Tarbet, near Loch Lomond; Falls of Dochart at Killin, near Stirling; and Fife Arms Hotel at Braemar in Aberdeenshire. When pubs and bars are allowed open in the central belt of Scotland, Harviestoun’s Old Engine Oil is also available on draught at Edinburgh’s Waldorf Astoria Hotel, Holyrood 9a, The Southern, Red Squirrel and OX184.

Harviestoun is a pioneering producer of 10 high-quality craft beer and lagers.

Another of Harviestoun’s craft stouts is Ola Dubh, their 12-year-old Whisky Aged craft dark ale. Its base beer for the brew just happens to be is a 10% abv version of Old Engine Oil.  Ola Dubh, meaning ‘Black Oil’ in Gaelic, is craftly created by taking the Old Engine Oil and maturing it in Highland Park whisky casks. The process is far from simple, but the result is a beautiful brew with complimentary whisky notes and a chocolate, roasty and bittersweet aftertaste.

To take part in Harviestoun’s first Instagram Live stout tasting event at 5.30pm on Thursday 5th November, go to www.instagram.com/harviestounbrewery and use hashtag #InternationalStoutDay and #harviestounstoutday.

Old Engine Oil [4.5% ABV] is now available to buy in a new five-litre mini-keg format priced at £22 per keg, as well as a choice of bottle packs from Harviestoun’s online shop at https://harviestoun.com/product/old-engine-oil-mini-keg and https://harviestoun.com/product/old-engine-oil-craft-stout with next day delivery around Scotland and the rest of the UK.

For more information about Ola Dubh and to buy online in cases of 330ml bottles [8% ABV], visit: https://harviestoun.com/product/ola-dubh-12yr-old-whisky-aged

Based at Alva, near Stirling, Harviestoun is one of Scotland’s most awarded breweries and is a pioneering producer of nine high-quality craft beer and lagers, including its most famous award-winning beer, Schiehallion (pronounced she-hal-ion) pilsner, which is named after a well-known mountain in Perthshire:

Press release from Taste Communications on behalf of Harviestoun