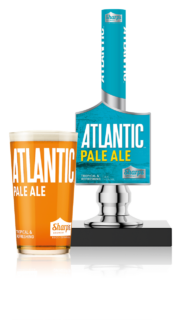 Sharp’s Atlantic Pale Ale was selected as winner in the Best Cask Ale category by a judging panel of professional brewers. It also picked up the bronze medal in the Best Bottled Ale category, recognising the ale’s quality across both formats.

Atlantic Pale Ale is inspired by the Atlantic Ocean, bringing together flavours of zesty American hops with a delicate sweetness to produce a truly unique, refreshing ale.

The International Brewing Awards is one of the oldest running brewing competitions in the world, dating back to 1886. The bi-annual competition is judged solely by expert brewers from across the globe.

Marketing controller at Sharp’s Brewery, James Nicholls said: “It’s fantastic for our Atlantic Pale Ale to be recognised by our fellow brewers with two such prestigious awards. We pride ourselves on quality and consistency across all packaging formats so to win in both cask and bottle is a huge achievement and testament to the skill and effort of our expert team of brewers.”

It rounds off a successful year for Sharp’s Atlantic Pale Ale, which was also awarded a silver medal at the International Beer Challenge and a bronze at the World Beer Awards.

Nicholls added: “Our Atlantic Pale Ale is earning more and more recognition for its quality and continues to go from strength to strength. We will continue to support the brand in the new year, and work with our customers to help them make the most of its growing popularity.”

Sharp’s Brewery is a modern brewer, based in Rock, Cornwall, which has grown rapidly since its foundation in 1994, increasing staff numbers in the last 10 years from 70 to 114.Sharp’s is the largest brewer of cask beer in the South West, and Doom Bar is probably the most successful cask beer of its generation and is currently the UK’s no.1 cask and premium bottled ale brand *.

A testament to the quality of each drop of beer, Sharp’s has a tally of over 100 international brewing awards, which in 2021 included Sea Fury winning the highest accolade of ‘World’s Best Pale Bitter’ in the World Beer Awards as well as Country Winner in the pale ale category. Sharp’s Offshore Pilsner also won Country Winner (lager category) and Wolf Rock and Sharp’s Camel Valley Pilsner both earned Silver medals, while Sharp’s Atlantic golden ale was awarded a Bronze. Sharp’s brand-new cider product, Cold River Cider also secured silver at the International Cider Challenge 2021. Sharp’s also won a total of six awards across three categories in the 2021 International Beer Challenge including gold in the International Cask Beer category for Atlantic Pale Ale.

Sharp’s Brewery is a proud supporter of grassroots rugby in Cornwall and sponsors a number of local clubs. In 2019, Sharp’s turned the tables on the music industry through ‘Keynvor’, a partnership with Mercury Music Prize nominee Nick Mulvey to produce the first playable vinyl made from recycled ocean plastic found on the Cornish coast. Proceeds from sales of the exclusive ‘Ocean Vinyl’ including digital streams continue to go to Surfers Against Sewage, raising around £10k to date. Sharp’s is an official partner of Surfers Against Sewage, supporting their Million Mile Beach Clean campaign in 2021 and helping to protect British coastlines from pollution, including plastic waste. Website: www.sharpsbrewery.co.uk