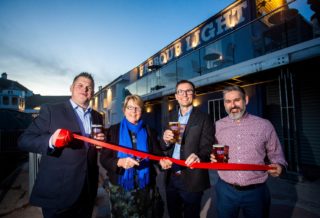 The Grade II listed harbourside building has undergone a six-month restoration, giving it a new lease of life, whilst ensuring its historic character is preserved. The building – believed to have been used as a fish cellar and net store originally – was vacant when the brewery acquired it last year.

The new pub is part of the Torbay Council’s Port Masterplan, promoted by the Torbay Harbour Committee, to upgrade and enhance the historic harbourside area for residents and visitors to Paignton. Having agreed to invest in the regeneration project, the Council worked alongside the Torbay Development Agency (TDA) to identify the right partner to take the project forward.

Following a competitive tendering process, St Austell Brewery was given a 90-year lease on the Harbour Light, which TDA hopes will lead the way in terms of improving the harbour’s vibrancy, attracting further investment in Torbay and generating job opportunities.

“Having worked closely with town council, harbour committee and TDA throughout the restoration, we’re so proud of the finished result – a family-friendly venue, in an amazing position with unrivalled views across the harbour. It’s perfect for people looking to recharge and refuel, whether they’re taking a break from a sailing trip, exploring the town, or taking a walk along Paignton’s seafront.

He continued: “We look forward to welcoming local residents and visitors to the area.”

Established in 1851, St Austell Brewery – which is independent and family-owned – owns 182 pubs across the West Country. The brewery owns 35 pubs in Devon, including the Old Market House in Brixham, the Royal Castle Hotel in Dartmouth and the Royal Seven Stars in Totnes.

For more information on the Harbour Light, and to view the menus, visit www.harbourlightpaignton.co.uk.

A gem at the heart of the Cornish community, and an employer of over 1,500 people, the company also has an estate of 182 pubs, inns and hotels across the South West.