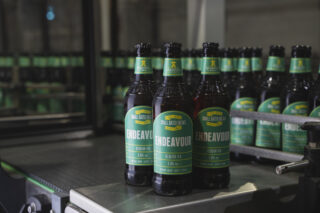 St Austell Brewery has released a new beer as part of its limited-edition Small Batch Brewery club. Usually an exclusive cask beer programme, the team at St Austell has decided to launch a collection of new bottled beers while the pubs stay closed.

First up is session IPA, Endeavour. While a modest 3.8% ABV, the beer provides an impressive zesty treat for the senses. An alluring tropical aroma is followed by big juicy mango and citrus notes, a refreshing combination forged from Aurora and Wolf hops.

Just like the cask club, the new beers will draw inspiration from all corners of the world and allow the brewing team to experiment with a range of hops – some exclusive to St Austell.

George Young, brewing director, St Austell Brewery Family Group, said: “We’ve all been missing the Small Batch Club, and with pubs continuing to stay closed we felt it was a great time to launch some brilliant new beers. Planning an exciting schedule of limited-edition beers has given our highly passionate and experienced brewing team the chance to experiment. Innovation has been long been a key part and driving force behind all we do at the brewery.”

George added: “We hope it won’t be too long before we can restart the cask Small Batch Cask club, but in the meantime, we’ll enjoy launching a selection of new bottled beers in the coming months whilst we all look forward to a much longed-for pint of cask beer.”

Endeavour is available in 500ml bottles from St Austell Brewery’s online shop, priced at £29.00 – while stocks last. Be sure to keep an eye on the brewery’s social media channels for news of further limited-edition releases in the coming weeks and months.