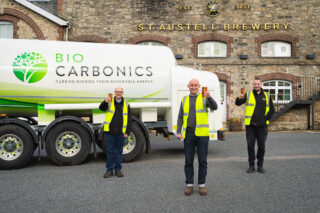 St Austell Brewery has taken another significant step in its commitment to become one of the UK’s greenest brewers.

Both St Austell Brewery and its sister site, Hare Brewery – home of Bath Ales – have made the switch to a 100% renewable and sustainable CO₂ (carbon dioxide) supply. CO₂ is a crucial component in the brewing and production process. Examples of its uses include the carbonation of packaged beers, the purging of road tankers, and the pressurising of kegs.

The brewery’s new supply is sourced locally from green energy specialist, BioCarbonics Ltd, which generates green CO₂ from maize grown in the South West. The maize is broken down naturally via a process called anaerobic digestion, which produces the gas.

Andrew Holden, Head of Procurement & Property, St Austell Brewery said: “We go to great lengths to be environmentally efficient and are always looking to go further. Our partnership with BioCarbonics represents a double win: CO₂ that is both 100% renewable and sourced locally here in the South West, resulting in fewer road miles to reach our two sites. We’re proud to be doing our part in protecting the unique and beautiful environment we call home.”

Christopher Carson, Managing Director, BioCarbonics, said: “Our unique supply model for the UK’s CO₂ industry guarantees a better continuity of supply. What’s more, rather than relying on ammonia or other chemical processes that burn fossil fuels, our green CO₂ is recovered from clean and renewable bio-methane production.”

St Austell Brewery was a recipient of the Queen’s Award for Sustainable Development in 2018.

BioCarbonics supplies liquid CO2 sourced from renewable energy sources to customers in the UK.  With a growing number of small CO2 sources, BioCarbonics offers a sourcing model with superior security of supply compared to the traditional sources in the marketplace.  And using state-of-the-art analytical equipment, BioCarbonics produces and certifies product to the highest quality levels, such as EIGA and ISBT.  Visit www.biocarbonics.com for more information.