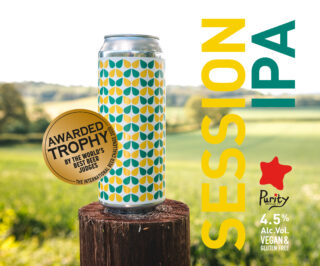 Warwickshire based brewery Purity Brewing Company is once again celebrating International success as their Gluten Free Session IPA was named the World’s Best at the recent 2020 International Beer Challenge.

The International Beer Challenge – is a world-wide renowned beer competition rewarding only the best tasting beers from around the globe.  This year with over 500 beers from 30 countries submitted, each beer is taken through a rigorous judging process – in a highly controlled setting of blind tastings by panels of more than 70 respected and experienced industry experts.

Purity’s Session IPA is a moreish, gluten-free session IPA, infused with real grapefruit peel and brimming with tropical fruit notes and hop aromas. At the start of November Purity successful launched 330ml single can across all major Sainsbury’s stores nationwide.

Purity’s Session IPA was the brewery’s first beer that was certified Gluten Free, initially released as a summer seasonal in 2018 the beer proved incredibly popular that the decision was taken to include as a permanent offering. The striking and eye-catching design was the result of working in partnership with students of the Birmingham School of Art, the can was designed by two talented students.

Commenting on the recent award success Paul Halsey CEO and Co-Founder of Purity Brewing Co. said  “Being recognised for Pure Quality in handful of award categories is always a real honour for us. We’re incredibly proud of every award we win, but to be named the World’s Best makes it even more special.”

‘Receiving such prestigious awards at an international level is the ultimate stamp of quality. With recent roll out of our 330ml Session IPA cans in Sainsbury’s, I’m so pleased we’re able to share this success Purity fans nationwide.’

To celebrate this international win Purity Brewing will be releasing a limited run of 5L Mini Casks alongside some new 4 x 330ml consumer packs both available from their online store www.puritybrewing.com/shop

Central to the brewer is a strong commitment to supporting the environment. Purity only uses natural ingredients, supports recycling programs and respects the community. Also, waste products are recycled through a pond and wetland system. This sustainable eco-system helps minimize carbon dioxide emissions and encourage wildlife diversity.

For further information please contact: Paul Brazier on 01789 488007 or via Press@PurityBrewing.com