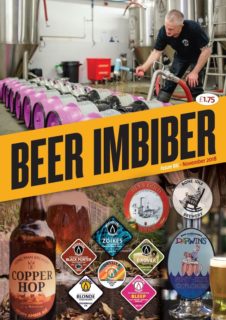 Guild member Steve Finn took over as owner and editor of The New Imbiber magazine earlier this year and reports on progress to date – which includes a name change to The Beer Imbiber.  He says:

“The Imbiber was born in the 90s, first as the Imbiber and then the New Imbiber. Initially it was a ‘beer tickers’ journal, very interested in new beers and new breweries.

“Although it’s been around for quite some time, the magazine was relatively low profile and had its struggles; as is the case with so many print magazines. In April this year it was about to breathe its last and I thought that the title had a little history, and some subscribers, and was worth trying to save.

“We are three issues in now and it’s been a scramble to get it finished each time but I’m pleased with where we are. We are still carrying the new brewers and new beer listings that the magazine has always had but we are also featuring stories on as many of those brewers as we can plus anything else that comes onto our radar and might be of interest.

“We changed the name to include ‘beer’ which I felt was necessary if we were ever to be found online. We’ve worked hard on the website www.beerimbiber.co.uk and tried hard to listen so that we can deliver relevant and engaging content. We’d welcome feedback from Guild members.”

“I feel that it’s a great time to be interested in beer and believe that there are enough kindred spirits out there to keep a small circulation magazine alive; hope I’m right! We’d welcome feedback on “

To order a copy of the magazine or to suggest content, email Steve at steve@beerimbiber.co.uk.