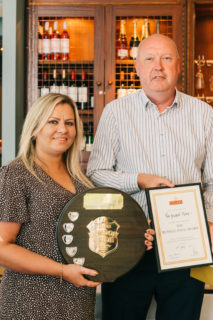 Fuller, Smith & Turner, the premium pub and hotel business, has named The Jugged Hare, Victoria as the winner of The Russell Page Award 2019.

The Russell Page Award recognises outlets that maintain an outstanding level of quality of Fuller’s beer products, exemplary customer service and comprehensive knowledge of the brands. The Jugged Hare demonstrated these attributes – which enables employees to maximise beer sales by informing consumer choice. By demonstrating their passion for Fuller’s beers and build on Fuller, Smith & Turner’s long-term supply agreement with Asahi, owners of The Fuller’s Beer Business.

The competition is open to any Fuller’s managed or tenanted pub. To enter, they must be nominated by their Operations Manager or Business Development Manager. To make it as a finalist, the nominated pubs must achieve 100% in their mystery shopper visit. The finalists are then considered by a group of judges.

Grazina Tenyte, Manager of The Jugged Hare, said: “It’s so nice to receive this award – I believe my team is the key to success. For us, being nominated gave us even more motivation to do better, and we will continue to improve each day.”

Judge of The Russell Page Award and Trade Quality Team Leader for Asahi, Ashley Cherrett, said: “Congratulations to Grazina and her team. The level of knowledge, pride and passion from the whole team was really impressive – this is a well-deserved award that recognises their hard work.”

A selection of photos can be downloaded here – https://we.tl/t-0I1Xk1PJZl

The Russell Page Award has been created in memory of a former member of the Fuller’s team who sadly passed away in April 2015.

Russell worked for Fuller’s for 33 years promoting high standards in Beer Quality throughout the business and, during his time, he always strived for perfection in everything he did. His unwavering enthusiasm, passion and motivation to fight for that best pint were admired by many in the industry. This award allows his legacy to live on and the great work he started to continue.