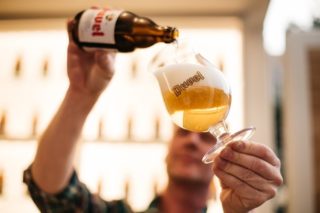 Duvel and Duvel Tripel Hop Citra will lead the charge.

“Duvel Tripel Hop Citra could well be the taste sensation of the show. A permanent line since 2017, Duvel Tripel Hop Citra is 9.5% abv and un-like any other beer, and it has seen its UK sales surge. Its juicy American Citra hops burst through the beer’s gossamer surface like a killer whale through a mill-pond sea. And yet it has freshness and balance, and its deliciously expressive citric hops have the flavour to titillate the tongue and enliven the gastronomic senses. The Citra hop beat other global hops including Amarillo, Sorachi Ace, Mosaic, Equinox and Experimental Hop 291 in the competition, judged by Duvel drinkers in Europe. It is a worthy winner.”

Duvel Tripel Hop Citra builds upon the iconic recipe of its 8.5% abv sibling Duvel, which has also enjoyed an inspiring 12 months of UK sales.