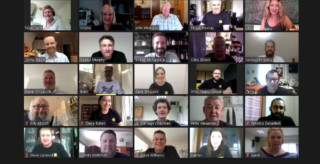 The first round of the World Beer Awards has just been held and it is probably the first online beer-judging competition in the UK. Overseen by chair of judges journalist and British Guild of Beer Writers member Adrian Tierney-Jones, it featured over 72 judges split into 64 groups of three or four, all of whom tasted beer in their own homes and were linked by Zoom. All beers were send to the judges individual wrapped and labelled so that the tasting could remain blind.

The Awards takes place annually during the summer and usually has its judges all in one place with beers being judged over one day. However, due to the lockdown and the demands of social distancing, this time, two three-hour sessions a day over three days took place with the judges coming from the UK, Ireland, Belgium, Germany, Spain, Poland and Italy. Countries from where the beers being judged came from included the UK, Ireland, France, the Netherlands, Belgium, the USA, Poland, Portugal, China, Myanmar and Taiwan. Separate competitions were held in Brazil, Germany and Canada, with the last two being chaired by Guild members Markus Raupach and Stephen Beaumont. With a few delayed arrivals due to these exceptional circumstances, further tasting sessions have also been added on at the end of July to ensure all entered products get a chance to compete.

‘We are really thrilled with the way it has gone,’ says Tierney-Jones, ‘thrilled with the quality of the judges, who featured many members of the Guild, and the way everyone worked together as virtual teams. When it was first mooted, it seemed an obvious way to keep the World Beer Awards vital and fresh in this challenging times. I look forward to the finals next month.’

All the beers that the judges contemplated were sent wrapped and numbered to their homes alongside a welcome package, which included stationary and that all-essential part of the beer judging kit, a packet of Jacob’s Crackers.

‘It took a lot of work to organise sending out the packages,’ says the Awards Director Anita Ujszaszi, ‘and our judges were fantastic in the way they organised themselves with cooling the beers, getting them in the right order and tasting their way through them in the allotted time, all helped by their table captains. It’s definitely a new way of judging beer, which we might look at further for our competitions. A big thank you to all involved also on the operational front and the DHL delivery team for getting over 450 parcels to our judges’

Individual country winners will be announced in August prior to the finals, which will be held on a yet to be determined date, again remotely.