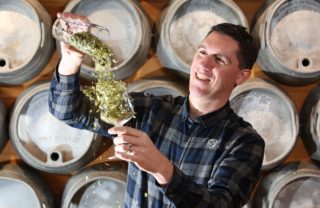 Black Sheep Brewery is bringing a taste of the ‘new world’ to British pubs from this month with the launch of its new keg beer, Black Sheep IPA.

Featuring a blend of three new world hops, Simcoe, Citra and Columbus, the IPA has been developed by the creative brewing team at the Masham-based brewery.

Inspired by innovators of the modern American IPA from the West Coast of the USA, the latest addition to the Black Sheep portfolio represents the brewing team’s extensive experience in creating both classic and modern styles of beer.

A hop dominated pint with tropical notes and vibrant grapefruit flavours, the 4.6% IPA is brewed with fresh water from the Yorkshire Dales and fermented using Black Sheep’s famous Yorkshire Square system. Its pale malt blend provides a light and gentle base that allows the fruity, piney flavours to flourish.

Jo Theakston, Innovation and Export Director at Black Sheep Brewery, said: “Innovation is at the heart of everything we do at Black Sheep and we are constantly challenging ourselves to develop new and exciting brews that complement our hugely popular range of classic cask and bottled beers.

“We love any opportunity to blend traditional and craft brewing, allowing our team the freedom to be really creative. We’re looking forward to letting pub customers experience the amazing flavours of Black Sheep IPA when it becomes available on 17th February.

He added: “We are huge admirers of the West Coast IPA and the pioneering brewers who recreated this iconic style of beer. We feel a real connection with these brewers who share a lot of the values that we hold dear at Black Sheep. We hope we have done them proud with our iteration of the new wave IPA and we’re confident it will have a broad appeal among our following.”

THE HIGH-RESOLUTION PHOTOGRAPH TO ACCOMPANY THIS NEWS RELEASE CAN BE DOWNLOADED FROM:  https://www.recognitionpr.co.uk/clients/id/25338

In the past 12 months, Black Sheep has won a number of prestigious awards, including:

The Visitor Centre, at the site of the iconic brewery, has grown to become an award-winning attraction for visitors to Yorkshire, with tens of thousands of people flocking to Masham each year.