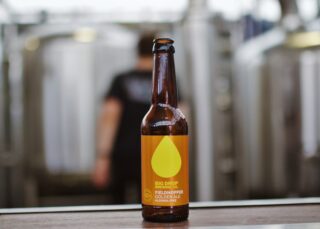 Fieldhopper is a lightly carbonated golden ale and Vegan-friendly as well as alcohol-free, so can be enjoyed by a wide audience of craft beer fans. And, at just 41 calories per bottle, will appeal to the more health-conscious drinker. As the first single hop style from Big Drop, it uses the quintessential English hop variety – East Kent Goldings – and is described by the brewer as having earthy, honey flavours with the aroma of orange blossom and grapefruit.

Nick Worthington, Commercial Director of Big Drop, commented: “We’re all fans of the classic British country pub and wanted to create a beer to celebrate that, drawing inspiration from a late summer ramble to reach our favourite watering-hole. So we sought out the most renowned British hop and made it the central character of Fieldhopper in all its rustic glory. The result will now be a permanent fixture in the Big Drop range as it’s a very popular style that also happens to answer the call for more Vegan-friendly AF options.”

With Big Drop’s alcohol-free beers having previously won medals against full-strength rivals – in the World Beer Awards and International Beer Challenge – there is an expectation that Fieldhopper could follow suit.*

Fieldhopper’s is available from www.shop.bigdropbrew.com – priced at £22 for a case of 12 x 330ml bottles.

Big Drop was launched in 2016 as the world’s first brewer dedicated to alcohol-free beer by the-then City lawyer, Rob Fink and long-time friend James Kindred. It has since won 28 major international beer awards including twice being judged the ‘World’s Best’ at the World Beer Awards and winning medals against full-strength rivals. Recognised as the market leader in this rapidly growing sector, Big Drop has achieved significant success in the UK with listings in major retailers: Sainsbury’s, Waitrose, Morrisons and Ocado as well as on the High Street with Holland & Barrett and on doorsteps with Milk & More (see www.bigdropbrew.com for where to buy, including pubs & bars). In 2019 it sold over a million cans and bottles worldwide across a rapidly growing number of overseas territories. Big Drop contract brews in batches through a network of brewing partners which means it can produce its beer locally and ethically with a minimal carbon footprint. Its range of craft beers, which are all <0.5% ABV, currently consists of: Stout, Lager, Pale Ale, IPA, Brown Ale, Golden Ale, Hazelnut Porter and a Sour as well as special editions and collaborations.