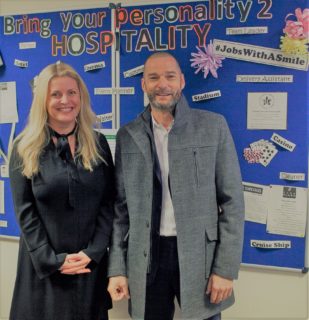 Hospitality Works, the campaign to promote careers in hospitality in partnership with the British Beer & Pub Association (BBPA), has returned for 2020.

The campaign, launched today, will last until March 2nd. It will highlight the value of a career in hospitality, including those in beer and pubs, to job seekers across the UK.

Throughout the campaign, job seekers will have the chance to meet with their local Job Centre Plus and potential employers to discuss relevant opportunities.

Since its inception in 2015, Hospitality Works has created in excess of 8,000 work placements. Within the beer and pub sector, roles available this year as part of the campaign range from front-of-house and bar work, to skilled roles in the kitchen including chef work.

To promote the campaign and the great career paths available within hospitality, BBPA CEO Emma McClarkin met with Fred Sirieix, the French maître d’ best known for Channel 4’s First Dates, at a Job Centre Plus in Peckham, London. The visit saw Emma, Fred and other industry representatives speak to job seekers about the range of career opportunities available to them at present in hospitality.

“Hospitality, including beer and pubs, is a sector with fantastic career opportunities for anyone. The career progression can be rapid too. In a pub it is common to see people who started out serving at the bar but now run the whole venue.

“Our sector is facing a skills shortage, especially when it comes to pub chefs and kitchen staff. It’s why we are delighted to support the Hospitality Works campaign again, promoting the exciting and rewarding careers our members have to offer.”