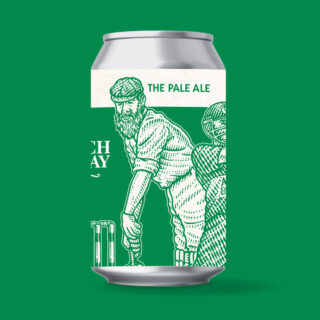 Independent London-based craft brewery Anspach & Hobday have announced the launch of their brand-new 330ml can range available exclusively at Marks & Spencer stores in London and the South East.

Marks & Spencers are adding 330ml cans of The Pale Ale (4.4%), The IPA (6.0%) and The Porter (6.7%) to their existing portfolio and the beers will become available to the public from January 4th. Please see here for a full list of stores, and here for an interactive map of stores.

The craft beers are launching with a limited-time offer in every store, with all three cans available for £5.

Anspach & Hobday previously had 330ml bottles available at Marks & Spencer of The Pale Ale, The Porter and The Cream Ale – which has now been replaced by The IPA.

Brands Direct Ltd has overseen the change from 330ml bottles of Anspach & Hobday craft beer to 330ml cans with Marks & Spencer, and has been a supply partner to M&S specialising in regional craft beers and ciders since 1995.

These new 330ml cans mark a continuation of the relationship between Anspach & Hobday and Marks & Spencer, aiming to supply the people of London and the South East with fresh, flavourful and exciting craft beer to their local M&S stores.

Chairman and Co-Founder Jack Hobday says: ‘As we all look to a brighter 2021, we have to give thanks to all of our customers for their patronage. That includes M&S who must be celebrated for supporting local and independent beer this difficult year, and in turn we thank their customers for choosing Anspach & Hobday beer.

One of the first M&S stores in London was opened in 1910, a Penny Bazaar in an arch-way in Brixton, a sister location akin to the Bermondsey railway arch in which our brewery began. In the early 1900s Londoners drank Porter brewed in London, and most of that was enjoyed as draught beer in local pubs. 111 years later as we launch our cans in M&S, including our world famous Porter, we can take great comfort from the heritage and enjoyment that resides in beer. From everyone at A&H: Cheers for your choosing our beer and here’s to 2021, a year in which we hope to revisit some of the joys of the past.

Head of Production and Co-Founder Paul Anspach says: ‘“Moving our beers into cans has been a huge step forward for us, and we couldn’t be prouder to launch 3 of our classics into M&S. These three beers are at the very core of our brewery, with The Porter being developed by Jack and myself during our home brew days, and was the beer that launched the business in the first place. Putting these beers into cans will mean we can present them at their very best; bright, fresh and full of flavour.”

The Pale Ale (4.4%) – Pale Ales are the mainstay of today’s craft brewing scene, but they date back to the 1700s, when innovation led to the production of new and paler malts. Our interpretation brings the style bang up to date, pairing a crisp malt base with fresh American hops. Light, bright & fruity, The Pale Ale is our ultimate drinking beer. Brewed with Citra, Mosaic and Simcoe.

The IPA (6.0%) – India Pale Ales were born in 18th century Britain. The style has since been on a journey of development and diversification. Our IPA is inspired by those from the West Coast of America. Brewed in London with British malt and American hops (Summit, Ekuanot & Enigma), it is dank, resinous and fruit forward. Store cold and drink fresh.

The Porter (6.7%) – The Porter is our flagship beer. The style established Victorian London as the centre of the brewing world. The Porter is also the beer that started us on our journey.  Our blend of highly kilned and roasted malts is suited perfectly to our water, producing balanced flavours of rich coffee and dark chocolate. This award-winning Porter represents the true beer style of London. It is one that we are incredibly proud of.

Inspired by traditional styles and remade for the 21st century beer drinker, Anspach & Hobday is known for its diverse range of beers. Brewing everything from historic ales and porters to experimental sours and IPAs. All of our beers are vegan friendly and made using renewable energy.

Founded in 2013 by childhood friends Paul Anspach & Jack Hobday, A&H is undergoing rapid growth following a successful round of crowdfunding in early 2019. Anspach & Hobday is best known for its flagship beer, The Porter. The brewery epitomises London craft beer, bringing together tradition with modernity.

Established over 25 years ago, Brands Direct has developed a growing reputation within the industry for delivering innovative and quality products to the retail market.

Working closely with our manufacturing partners we have developed first to market concepts from within our drinks, infant foods and gluten free ranges. Our philosophy is to work hand in hand with both retailers and manufacturing partners in developing a trusted and long term relationship that creates profitable and sustainable products.

Our business ethos is to offer a Category Management solution for our customers and partners from concept to shelf.