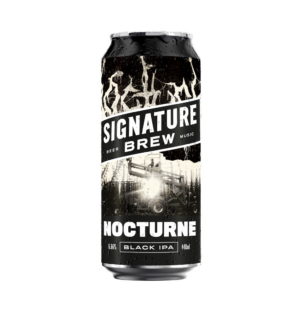 East London brewery, Signature Brew (www.signaturebrew.co.uk) is seeing out 2020 with one final launch: Nocturne Black IPA (£5.00, 440ml can, 6.66% ABV), a blackened beer, brewed to summon the traits of Yakima Chief Hop’s new strain, Talus. One of the first beers in the world to utilise the new hop, in true collaborative fashion, Yakima Chief Hops visited the Walthamstow brewery to help brew the beer. Expect gnarled notes of grapefruit and violet, melding with blasts of tropical fruit and the embers of a roasted malt character.

The beer’s name, Nocturne, denotes a piece of music inspired by the night – a moniker perfect for an IPA this black. Yakima Chief’s new hop Talus also sounded very black metal, one of the darkest musical genres, so when developing the can’s distinctive artwork Signature Brew took inspiration from some of their favourite black metal bands. The custom Nocturne black metal logo has the YCH hop logo sprouting from it. Clocking in at a very fitting (genuinely unintended) 6.66% ABV, look for a 6.66 spot laminated across the artwork.

The appearance is very dark, with a slight red tint when held to the light. You’ll find medium carbonation; aromas of intense pink grapefruit and violet with a little tropical fruit in the background; a very subtle roast malt character is also present, suggesting lightly roasted coffee; to taste, you’ll find a slight roasted malt flavour which is washed away by overwhelming big fruity and floral hops and a refreshing, crisp bitterness.

Led by founders Sam McGregor and Tom Bott, the Signature brewery team is made up of musicians and music fans alike and – with an unwavering commitment to quality – Signature Brew has channelled the spirit and energy of live music into a brewery that stands for craftsmanship, artistry and passion. Brewed in Walthamstow, enjoyed by beer lovers and music superfans globally, their beers are of unrivalled quality, and they were crowned SIBA’s highly prestigious Brewery Business of the Year 2018.

2020’s Covid 19 crisis has seen Signature Brew get creative to keep the beer flowing in people’s homes, creating the Pub in a Box, hand delivered in London by musicians who had their tours cancelled (paid London Living Wage) and delivered via courier nationally. Signature Brew hosted a series of socially distanced gigs at the brewery to keep live music playing, they’re also prepping for the sold out Piss up in a Brewery (when all of this blows over), as well as two Skints gigs (their first in E17 for 10 years) as something for everyone to look forward to – we can all raise a glass to that! Signature Brew are gearing up for a momentous 2021, a year that will see the brewery rally around venues and musicians whilst celebrating their 10th Birthday with many more live shows, exclusive beers and band collaborations.

Find Nocturne at Signature Brew’s venues, currently operating for takeaway, in Haggerston and Walthamsow, and via https://www.signaturebrew.co.uk/products/nocturne-440ml-black-ipa