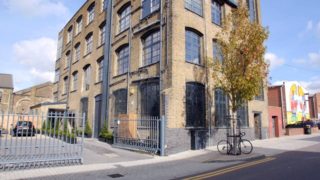 Following soft launches, crowdfunder nights and one very special tap takeover, Cave Direct and Beer Merchants are excited to say that the Beer Merchants Tap is due to open its doors to the public on Saturday 24th of February – bringing 22 taps, 700 bottles and a new feel to the amazing beer scene in Hackney Wick.

Taking influences from American bottleshops, Belgian beer bars and geuzeries and the rustic feel of the British beer movement, Cave has put together an airy, comfortable taproom with a world-class selection of beers to drink in our takeaway, as well as excellent wines, spirits and bar snacks.

Jonny Garrett, marketing manager, says: “We’re so chuffed with the way the bar has come together and can’t believe we get to open in it just a few weeks. We owe a huge thanks to the designers, builders, consultants and crowdfunders and hope we can make them proud. We know it’s going to be a magical place to be, and since it’s our office it has to be!”

While the 24th marks the permanent opening, there will be soft launches, pledger parties, trade nights, press nights and a Half Acre Tap takeover, all designed to put the Tap and its staff through their paces and to test the space ready for the public. Key dates are below, and beer writers and journalists are all invited to the press night on Wednesday 21st February.

To register for the press night:  https://www.eventbrite.co.uk/e/beer-merchants-tap-press-night-tickets-42468839442