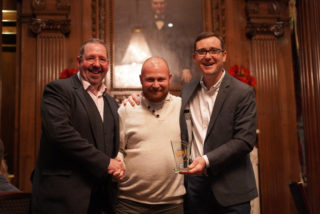 The award recognises the success of London-based Bohem in growing from “kitchen sink home brewing” to bespoke brewing kit and 60,000 litres of fermenting capacity over only 18 months. The judges also praised the brewery’s “dedication to solely producing authentic bohemian lagers”.

All Bohem Brewery beers are brewed on bespoke equipment from the Czech Republic, and authentically lagered in cold storage for a minimum of five weeks. Its expanding range of beers are served in a growing number of pubs, bars and bottle shops in London and beyond, and also served with authentic Czech pours in the Bohem Brewery taproom in Bowes Park, London N22.

The Brewers Choice Awards are given by leading industry magazine Brewers’ Journal to recognise the diversity and quality of the UK craft beer and brewing scene.

Petr Skocek, co-founder and head brewer of Bohem Brewery, said: “We’re delighted to be named Best New Brewery, and we’re very grateful to the Brewers Choice judges for recognising that our commitment to authentically lagered beers gives us a genuine point of difference.

“We’re very proud to be part of the UK’s independent brewing scene, and grateful to the retailers who stock and serve our beers with the care and attention they need, and the consumers who come back time after time to enjoy them.

“Our strong and steady growth so far demonstrates that there is still plenty of headroom for genuine, authentic lagers in the craft beer sector, and as the business continues to expand, our full focus is on maintaining that point of difference and our commitment to quality and innovation.”