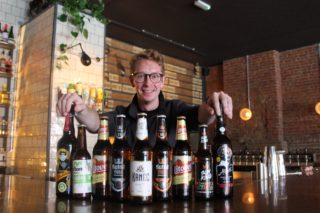 London’s beer aficionados are in for a Bohemian beer bonanza this June after the announcement of the first Czech Beer Week to be held in the UK.

Taking place from the 17th -23rd June around Czech Beer Day on the 19th June, the biggest selection of Czech beers, brands and brewers ever to hit the UK will be arriving in London for the celebrations.

Set up by leading craft and speciality beer importer Euroboozer in collaboration with Czech Trade and Czech Tourism, the week will see a selection of the capital’s leading pubs and bars run Czech-themed events, tastings and promotions.

Showcasing the heritage and history behind the beers of Bohemia, the special week will also enable consumers to discover the new blood now carrying the torch for the famous Czech brewing industry, which gave the world the incredible Pilsner.

The key happenings and dates, not to be missed during the week include:

Martin Macourek, Director for the UK and Ireland at CzechTrade, said:

“We’re so excited to be running the first Czech Beer Week in London with Euroboozer and can’t thank them enough for getting this off the ground. The week provides the perfect opportunity for the UK’s adventurous beer drinkers and foodies to sample a supreme selection of the new wave of Czech brewers and breweries looking to follow in the footsteps of the famous Czech Pilsner, offering genuine Real Bohemian Lager.  We’re delighted to be linking up with some of London’s best operators and bars and are confident it will be a Bohemian bash to remember.”