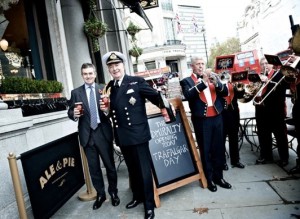 To commemorate Trafalgar Day [October 21st], Fuller’s unveiled its latest iconic pub yesterday. The Admiralty is the only pub on Trafalgar Square and was opened by former First Sea Lord, Admiral the Lord West of Spithead, and Fuller’s Chief Executive Simon Emeny. In true naval style, a magnum of London Pride was smashed on the outside of the building to celebrate the opening.

Please find photographs attached and see the link for a  video of the bottle smash: http://we.tl/5OKq3P0kS1

Fuller, Smith and Turner P.L.C. is an independent traditional family brewer founded in 1845 and is based at the historic Griffin Brewery in Chiswick, London, where brewing has taken place continuously since 1654. The Company runs 181 Managed Pubs and Hotels and 205 Tenanted pubs, with a focus on outstanding cask ale, great wine, exemplary service and delicious fresh, home-cooked food. The Company also has 641 boutique bedrooms in its Managed estate and owns a 51% share of The Stable, a craft cider and pizza restaurant business.  Fuller’s pub estate stretches from Brighton to Birmingham and from Portishead to the Greenwich Peninsula, including 168 locations within the M25.