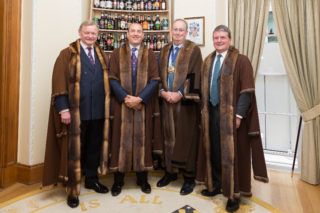 The second Thursday in July is the traditional date on which the Brewers’ Company installs our new Master.  This year we were delighted to welcome Paul Wells, Executive Chairman of Charles Wells, to the role.  Paul comes from five generations of the Wells brewing family which founded Charles Wells in Bedford in 1875.  They are a fiercely independent company and have just announced plans to build a new brewery, their third, for the 21st century.  Paul’s great love is pubs and the satisfaction of seeing customers enjoying a great pub experience. Nowadays Charles Wells has two hundred pubs in the UK and another twelve in France.  He has taken pleasure in introducing the great British pint to the French.

We were also very pleased to install our Wardens for the coming year: Stephen Spencer-Jones of Heineken UK, Simon Theakston of T&R Theakston and Richard Fuller of Fuller, Smith and Turner.  The Wardens will support the Master during his year in office and serve on the Company’s permanent committees, in preparation for their progression to the role of Master in future years.

At a very well attended lunch following the Court meeting, we said a fond farewell to Peter and Jane Furness-Smith who had served the Company as Master and Mistress since July 2016.  In his speech, the Immediate Past Master emphasised an issue which had become important to him during his year as the Master of a City Livery Company, that there are 110 Livery Companies in the City, all very different in constitution and wealth, but it is estimated that between them they give some £50m to charity every year.  He noted that our charitable work is the most important role of the Brewers’ Company and that it we should be very proud of the fact that we have managed to distribute over £1.8m to charitable causes this year, a sum nearly double that of 10 years ago.

At the lunch, we were also delighted to welcome seven new Liverymen, who were admitted at the preceding Court meeting: James Cuthbertson of Dark Star Brewing Company, John Foots of Camerons Brewery, Ciaran Giblin of Meantime Brewing Company, Steve Grossman of Sierra Nevada Brewing Company, Andy Maddock and Andrew Turner of Heineken UK, and Andrea Pozzi of C&C Group.  The Master welcomed them all to the Company and the unbroken line of members since 1438.