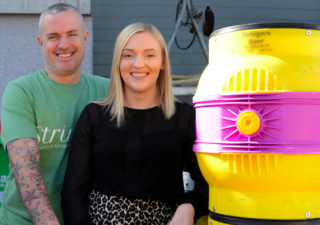 A LAKELAND brewery has set its sights on some of the biggest players in the hospitality industry after securing an industry-wide standard.

The bosses behind Cumbria-based Stringers say they will use 2020 to target the likes of Wetherspoons and Greene King.

It comes after the brewery achieved Society of Independent Brewers (SIBA) accreditation, which is a quality assurance mark linked to the beer production process.

Stringers Operation Director, Scott Mackenzie, said: “The SIBA accreditation is huge for Stringers, because it validates our production process and is a requirement for most of the large pub chains when it comes to working with them as a supplier.

“Of course we had full confidence in the way we brew our beer and already meet a very high bar when it comes to health, hygiene and safety, due to the regulations which govern us.

“SIBA offers further confirmation that all of the processes  – before during and after – which are involved in creating beer at Stringers are exactly as they should be.”

Stringers has amassed a loyal following of beer lovers in the North West and beyond and has achieved particular acclaim for its range of gluten free beers.

The brewery takes sustainability seriously and is powered by 100 per cent renewable energy.

The business is now brewing more than 4,000 pints a week and supplying 12 different ales to pubs and bars across the north-west.

The investment also paved the way for the launch of a range of bottled beers and mini kegs which are now available to buy in Lakeland Inns pubs and also available to the trade.

This year, there are exciting plans afoot, as head brewery Jon Kyme and his team plan for a series of limited edition brews.

They will complement the existing range and be released throughout the year.

Scott said: “We purchased the brewery in 2018 and since then have invested a lot of time and money into the premises and production.

“This year we will build upon that. We are hopeful that by the end of the year, Stringers will be enjoyed, not just by ale lovers of the North West, but of the UK. That’s the dream – and that’s the goal.”

Lakeland Inns is a family business which is run by husband and wife team, Scott and Kirsty MacKenzie.

The company operates four pubs across the south Lakeland area; The Sun in Ulverston; The Commodore in Grange and The Black Cock in Broughton-in-Furness.

Lakeland Inns creates its own beers and ales from its 100% renewably powered brewhouse in Ulverston. The beers are sold in all Lakeland Inns pubs under the Stringers Brewery brand, and are also available at pubs across the north west.

The Sun Inn is the proud holder of a Cumbria in Bloom gold award.