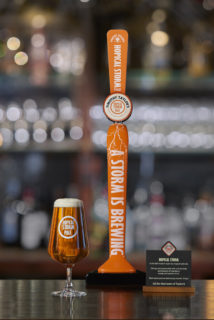 A storm is brewing again. This time it’s going to be a cold one!

Timothy Taylor’s have launched our first keg ale. Hopical Storm is a 4% ABV aromatic, dry-hopped, modern pale that, while initially launched as a well-liked cask product in Summer 2019, also performed exceptionally well when we trialled it in keg at high-profile festivals and selected pubs.

Our core business remains in cask, but we recognise that there are some quality outlets that either would prefer to offer a keg range to suit changing customers needs or do not have the cellar space throughput or staff expertise to serve cask. However, they do want to serve premium, consistent beers from well-respected breweries such as ourselves.

Hopical Storm is brewed using whole leaf hops grown entirely in the UK. Citrusy and sessionable, it has a pleasant fruity body topped with flavours of mandarin, mango and passion fruit and the style of beer particularly suits the keg format and a cooler serve for warmer weather.

Hopical Storm in keg will be launched in the UK at the BrewLDN beer festival on 27 February and is available now in selected Timothy Taylor’s pubs. For more information regarding stocking Hopical Storm in keg please contact 01535 691 599 or email puborders@timtaylors.co.uk.

Timothy Taylor’s is one of the UK’s oldest family-owned breweries with over 160 years’ heritage of brewing award-winning cask ales, with their Landlord winning more awards than any other beer, winning both CAMRA’s Champion Beer of Britain and the Brewing Industry Challenge Cup four times. Established in 1858 when Timothy Taylor began brewing in Keighley, the company remains in the family and is the last independent brewery of its type left in West Yorkshire.