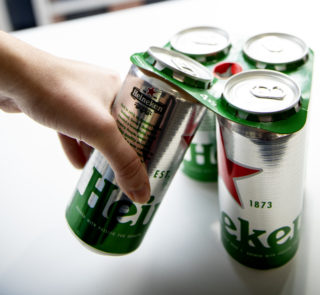 A brand new documentary that goes behind the scenes of one of the biggest breweries in Europe has been released.

The film follows staff at the Heineken Brewery in Manchester as they install a massive new production line which will eliminate plastic rings that hold four-pack cans together.

The brewery will be the first in the UK to install a packaging line that will package cans of beers with the ‘Green Grip’ – a cardboard holder which is 100% recyclable and totally compostable.

The brewery in Manchester which employs over 260 people, is the first of HEINEKEN’s three UK sites that’s benefitting from a £22m investment to eradicate plastic.  By the end of 2021 when similar work will have taken place in Hereford (where the company’s ciders including Strongbow are made) and Tadcaster (where John Smith’s is brewed) will save over 500 tonnes of plastic every year.

The film has been commissioned to follow the ups and downs of installing the brand new equipment, while keeping the brewery running 24 hours a day, seven days a week. In one scene, the film shows Technical Operator, Jack Kelly and Yutika Patel, Maintenance Manager, waiting with baited breath as some of the equipment is manoeuvred into its new position – to make way for the new machinery coming soon.

Matt Callan, Brewing & Operations Director, “This is a huge investment and transformation in Manchester, as well as the equipment suppliers, our local project and production teams will bring the experience and capabilities to deliver this new innovation to market. Along with the business’ investment, it’s our colleagues’ efforts that will result in us producing millions of packs of cans that will save hundreds of tonnes of plastic. The new Green Grip can-holder is one of the few cardboard packs which has a lower CO2 footprint than a plastic alternative, so this really is an innovation which delivers a sustainable solution.”

And it’s not just cutting out the plastic that’s providing huge sustainability benefits.  Reducing energy usage, saving water and even reusing CO2 are all having a big impact on Heineken Manchester’s environmental footprint.

The first of the three part documentary is available now on YouTube with the other episodes being released later in the year.

Over 500 tonnes of plastic will be removed annually through elimination of plastic rings and shrink wrapping by the end of 2021. Innovative cardboard topper to replace plastic rings across entire portfolio of beer and cider multi-pack cans, including Heineken®, Foster’s and Strongbow. £22 million investment will be split across Manchester, Tadcaster & Hereford sites. New packaging designed to not only remove plastic, but to minimise use of materials and reduce waste.  The cardboard topper is 100% recyclable and compostable and importantly for shoppers, is robust and easy to grip.

The pledge to eliminate plastic rings from the UK is the latest commitment in HEINEKEN’s ambitious ‘Brewing a Better World’ strategy which challenges the company to innovate in a sustainable way. Even though plastic packaging represents less than 1% of our packaging overall, we are committed to innovate sustainably. During the past three years, HEINEKEN UK has employed several creative approaches to deliver this goal, including ‘light-weighting’ glass bottles and aluminium cans, trialling deposit return schemes at festivals to encourage recycling and decreasing CO2 by 68% since 2008 through investments in new technology.

About HEINEKEN in the UK

Headquartered in Edinburgh, HEINEKEN is the UK’s leading pub, cider and beer business. The company owns around 2,500 pubs as part of its Star Pubs & Bars business and employs around 2,200 people. We are passionate about our cider and beer brands and the outstanding service that we offer to our customers. Our unrivalled portfolio of brands includes Foster’s, Heineken®, Strongbow, Desperados, Kronenbourg1664, John Smith’s, Bulmers, Amstel, Birra Moretti and Old Mout backed by a full range of niche and speciality brands.