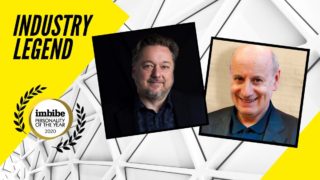 This year’s Industry Legend Award was shared by Pete Brown and Colin Dunn.

Hear more from Imbibe on the tough decision and why Pete and Colin were chosen:

“After hours of debate our judges decided there had to be two industry legends awarded this year – two different candidates you might never find. Both from different parts of the industry, both with very different careers and both in very distinct spheres of influence. Both with achievements that equally deserved to be recognised however. And so we did.

Our first legend, Pete Brown, is a man who gave up a lucrative career to become a blogger back in 2006. Since then he has written books, presented TV and radio programs and become a well-respected industry commentator. Along the way he has displayed a talent for championing the underdog: beer back when it was unfashionable; pubs when they were closing at a rate of hundreds a week; then he called out sexism in the industry, and cider got his attention when no one else was writing about it. Just like our other Industry Legend of 2020 (below) the only surprise for the judges was that he hadn’t gone home with this award before now.

Our second legend is Colin Dunn. Having previously spent time in the wine trade, Dunn now acts as whisky ambassador for Diageo. It was his influence and attitude to education that had our judges adamant to have him win this award, with personal anecdotes of his ability to import his vast knowledge of whisky to novice’s and experts alike. That and how tirelessly he continues to work. Tributes to this legend on the night showed just how much Dunn has shaped and educated some of the brightest stars in the UK’s bartending and spirits scene.”

Guild member Lily Waite was also recognized as Imbibe’s Trailblazer of the Year for The Queer Brewing Project.

The judges said: “This category had a huge breadth of talent and ingenuity, covering the likes of workers’ health, sustainability and giving our industry a voice. But it was Lily Waite of The Queer Brewing Project who really impressed this year’s judges. Her tireless work within in the LGBTQ+ community in our industry deserves serious applause – not to mention that she’s still under 30. Her outlook and attitude to the industry as a whole was refreshing and inspiring. A very worthy winner.”