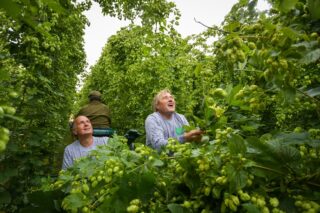 Hogs Back Brewery in Tongham, Surrey, has started the annual harvest of its hops this week, with a team of 20 Hop Pickers helped for the first time by a Suffolk Punch horse. The brewer is predicting its best ever crop from the 8.5-acre hop garden adjoining the brewery.

Last year was Hogs Back’s first full harvest from its larger hop garden, but the plants are now more mature and weather conditions have been more favourable this summer, helping the hop plants to grow higher, with more leafy lateral shoots bearing the hop cones that are needed for brewing.

Harvesting is being carried out by a team of 20 volunteer Hogs Back Hop Pickers, working with a horse as well as a tractor. The horse, called Sovereign, pulls a trailer between the rows of hop plants and then takes it, full of cut bines, to the hop hangar just yards away. Once there, the bines are loaded into the hop picker machine, which separates out the hop cones. These are then loaded into a kiln to be dried, vacuum packed to capture their flavour, and cold stored at 5°C on site until needed for brewing.

Hogs Back has invested significantly in its hop garden, acquiring its own hop picker, tractor and other equipment. This gives it complete control over harvest, meaning the hops can be picked at the optimum moment and packed within hours – which translates into fresher hops going into the brew and ultimately fresher tasting beer in the glass.

Rupert Thompson, Hogs Back Brewery owner, said: “Growing and harvesting our own hops has been a journey for us, and we learn new things every year about how to cultivate hops that enhance the flavour of our beers.

“This year we’re hoping for our biggest ever crop, thanks mainly to the right combination of warmth and rain, but also because we’re able to pick the hops when they’re at their best, so we have very little waste. And by transporting them just a matter of yards – from field to firkin in a furlong – we’re keeping our carbon footprint at virtually zero, which is part of our drive to become a more sustainable brewer.”

Hogs Back will harvest three hop varieties this year: Fuggles, used in its flagship TEA or Traditional English Ale; English Cascade, used in its Hogstar lager and Surrey Nirvana Session IPA and Farnham White Bine, a traditional local variety that the brewer saved from near-extinction.

After a pandemic-led absence last year, Hogs Back’s Hop Harvest Party is returning, and split over two days on 18 & 19 September, with a more music-focused Saturday line-up and a family-friendly feel to the Sunday celebrations, when Sovereign will be returning to offer rides around the hop garden.  Over 2,000 tickets have been sold.

Thompson added: “We’re grateful to our dedicated band of Hogs Back Hop Pickers, who will be helping us to bring in this year’s harvest, and to other TEA Club members who helped with hop planting and twiddling earlier in the year.

“Hogs Back is firmly rooted in the local community around Farnham, and our hop garden has revived an industry that was once important for the region, and which many older residents remember with affection. We look forward to celebrating another successful harvest with all our local friends at the Hop Harvest Festival and TEA Party next month.”