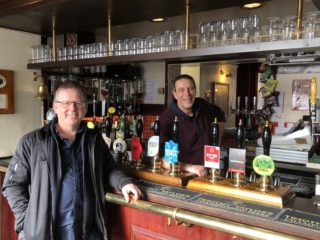 A celebration and relaunch party has been held at a community pub in York, to mark its ten years as a freehouse.

Local businessmen Paul Crossman and Jon Farrow saved The Slip Inn from potential closure when it was put up for sale in 2008, and they took over the actual running of the pub ten years ago this week.

In the past decade, they have added one new back room, extended another, built a new outside bar, redeveloped the upstairs flat, redesigned the main bar area, refitted the toilets, built a two-storey side extension including a new beer cellar and, most recently, turned the old cellar into a snug.

On Friday [FEB 21], locals and regulars gathered at the pub in Clementhorpe, near the River Ouse, to celebrate its ten years in independent hands and to see the final elements of the redesign. There was live music and a ‘greatest hits’ beer range, featuring some of the beers that have been most popular in the pub in the last ten years.

Mr Crossman said: “We had the full scheme in mind from day one, and it was great to be able to officially launch the expanded pub on the 10th anniversary of taking it over. It has been a chance for us to say thanks to everyone who has loved The Slip over the years and to celebrate its revival. We love the fact it has become something of an independent beer Mecca, yet has lost nothing of its welcoming community roots.”

Mr Farrow sadly died suddenly in 2017, and is much-loved and missed in the pub and community. His role as manager is now filled by his and Paul’s good friend Ian Warner.

The Slip had been through several changes in ownership in the 1990s and early 2000s, before its disposal in 2008. At the time, 52 pubs a week were closing, as large pub companies conducted mass sales during the financial crash, and there were concerns locally that The Slip was vulnerable to being converted.

Mr Crossman, who also runs The Swan 80 metres away in Bishopgate Street, said the success of The Slip since then has shown clearly what can be achieved when pubs are run independently. He now wants a national review of the industry so other pubs can also thrive more freely, saying “every pub should simply be given the same chance as The Slip”.

The ‘beer tie’ system currently allows big breweries or property companies that own pub buildings to choose which products can be sold and to act as intermediary wholesalers, restricting beer choice and forcing licensees to buy through them at much higher prices than in the free trade. It is a rigidly-enforced model which has been heavily criticised by four successive business select committees, and which eventually came under statutory regulation with the implementation of the Pubs Code in 2016.

Mr Crossman is on the steering group of the British Pub Confederation, which represents independent publicans, and says the business, enterprise and industrial strategy committee of MPs should now seek a competitions and markets inquiry.

He said: “Pubs are so fundamental to the cohesion of our society. They’re the last social meeting place for many communities, but the fortunes of a pub depend entirely on the freehold ownership of the building and the motivation of that owner. If it’s driven by a company and its financial priorities, such as servicing bond-holder debt, then they treat it very differently from an independent owner, who comes with a sense of stewardship and community.

“Because I already had The Swan, which I lease from a large pub company, it was clear to me what we were dealing with and also clear what The Slip could become. Our experience there now allows us to show how detrimental the beer tie is to so many other pubs. To free a tied pub and then make a success of it has been a big thing for us and others.

“Politicians need to acknowledge what is going on. Enforcement of the pub code by the Adjudicator has been terribly weak, so they need to take much more fundamental action. The key to making The Slip work was removing the beer tie, and that is the case in so many pubs all over the country. Removing that restriction allows a pub to be more, and to do more in its community.

“The Slip was very typical of a tied pub. It was passed from company to company, and the longstanding tenant with it of course, every time with different restrictions on what products could be sold. By 2008, the pub had been starved of investment for years, and was not realising its potential.

“What we need is a full competition and markets inquiry into the beer and pub sector, and that’s what MPs in the BEIS committee should now be pushing for.

“Parliament needs to stop paying lip service to pubs and actually do something to help them. We need a fundamental restructure of the rules that govern the industry, and we need the Government to stop supporting a closed market.”

Over the past ten years, the number of lines running from the cellar to the bar at The Slip has increased from ten to 26, with many now given over to beers from local and independent breweries, increasing the choice for customers.

Mr Crossman said: “Pubs like The Slip are gold dust for breweries because they can deal directly with us, but we are also proof of the difference that can be achieved when a pub is freed from the tie. We can contribute fully to the local culture and economy now, and like all thriving pubs we are doing good work socially, helping bring people together, tackling loneliness and isolation and providing and maintaining an essential additional space. I get great satisfaction from knowing that this pub is now out of reach of the big pub companies. I intend to look into placing a covenant on the building to say that it can’t ever be subject to a supply tie again, because it is now such a serious mission to protect these unique places for the community.”