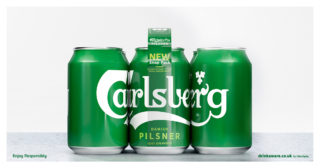 Goodbye plastic rings. Hello Snap Pack. By sticking cans together, the Carlsberg Snap Pack helps to halve plastic use from brewery to store. Part of the brewer’s ambitious sustainability plan, Together Towards ZERO.

Carlsberg UK is sponsoring a new prize within the Guild of Beer Writers Annual Awards this year, with the aim of recognising the importance of writing and other communication in driving sustainability in the beer and pubs sector.

The Carlsberg UK Award for Best Writing on Sustainability in Beer and Pubs is now open for entries until the closing date of 6 September. Submissions can be press articles in trade or consumer-facing publications, blogs, radio or TV broadcasts, podcasts or any other communication that reports on sustainability.

Entries can be made online on the Guild’s website https://www.beerguild.co.uk/awards/. All submissions will be reviewed by judges and a shortlist announced in November before the winners are announced the Guild’s Annual Awards Dinner on 3 December. The new Award comes with a £1,000 prize for the winner and £500 for the runner-up, contributing to a total prize fund of £13,500 – an all- time high for the competition.

Carlsberg UK Head of Corporate Affairs, Andrew Roach, said: “To secure a sustainable future for our industry, brewers and pubs must strive to have a positive impact on people and the planet. By sharing across the industry and learning from one another, we can progress faster.

“We are delighted to sponsor this new award to honour the writers, podcasters, filmmakers, journalists, and all those documenting the pursuit of better across the industry. It recognises their important role in sharing knowledge and ideas to build a more sustainable future.”

Guild Chair Pete Brown said: “Sustainability is one of the most important topics in our industry and likely to become even more so in the years ahead. It is absolutely right that we recognise and reward those writers who are contributing to greater awareness and sharing of best practice in the field, and we’re thrilled that Carlsberg UK are making this new award possible.

“We now have nine Awards sponsors and are immensely grateful for their support. We’re very proud of our awards scheme, which encourages entries from a wide range of communicators, is robustly judged and offers a generous prize fund. We look forward to rewarding the best beer and pubs communicators at our Awards Dinner in December

Award categories, criteria and downloadable entry forms can be found on the Awards page. Entries must have been published between 1 September 2018 and 31 August 2019 to be eligible.

Caption to attached image: Goodbye plastic rings. Hello Snap Pack. By sticking cans together, the Carlsberg Snap Pack helps to halve plastic use from brewery to store. Part of the brewer’s ambitious sustainability plan, Together Towards ZERO.

The British Guild of Beer Writers was formed in 1988 to help spread the word about beers, brewing and pubs. With more than 300 individual members and 60+ corporate members, its mission is “to improve the standards of beer writing and improve the public knowledge of beer and pubs.” Its members include the cream of the country’s beer communicators – be they journalists, authors, producers, photographers, broadcasters, illustrators or PR consultants. Corporate members of the Guild include brewers, brand owners, distributors, pub companies, and many suppliers associated with the brewing trade.